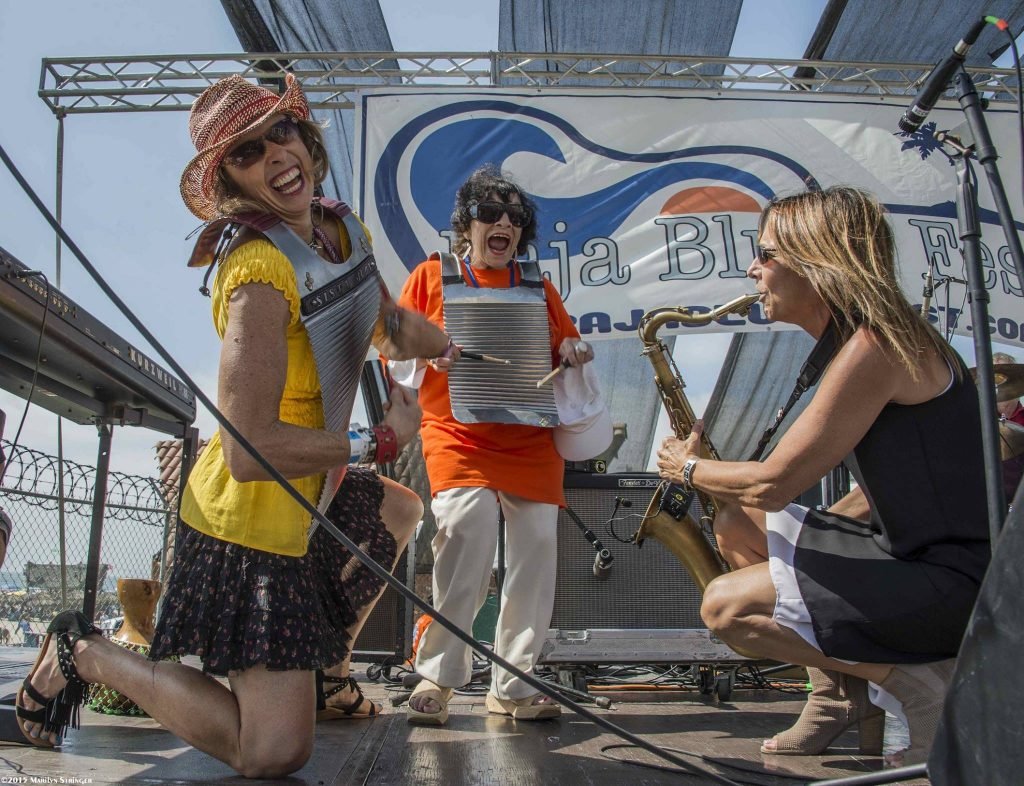 In November, the Baja Blues Fest President Jackie Alameda presented checks to the children’s organizations benefiting from this year’s annual Blues Fest event at a luncheon hosted by Bobby’s by the Sea.  Checks in the amount of $4,000 (USD) were presented to Rosarito’s Friends of the Library, the Los Angelitos Orphanage, and La Mision Children’s Fund/BECA.

Bev Wilburg, representing La Mision Children’s Fund, a 501(c)(3) organization, stated that the money would be used for the La Mision food bank, which feeds over 1,000 children. Once a month, families pick up a small parcel of beans, rice, pasta, tomato sauce, cooking oil and flour,  the cost of which is about $12. In November and December, families also received a small amount of chicken. On the last Wednesday of the month, Rotary members help to portion and bag these foods for the families. It costs about $1200 (USD) monthly to make up these tiny bundles. Thanks to a sustainable water system that was donated to the group, they are recognized as the only clean, potable water near Ensenada, in case of emergency.

Teresa Savala, representing  the BECA scholarship organization, discussed the schools and their needs in the La Mision area. There is currently a waiting list of students interested in high school. Parents are getting more involved in their children’s education, and more classrooms are being constructed. The money awarded today will be used for tuitions. The fundraising event “Fandango” funds about 90% of BEA’s needs, but BBF’s annual check really helps.  Although BECA is not a 501(c)(3) organization, they are now partners with La Mision Children’s Fund and are under the same “umbrella,” working closely together.

The Mexican government does not fund either of these programs. Books are considered a luxury and unaffordable for most families in Primo Tapia and the neighborhoods in the hills. Authors Darren and Ruby Perman, along with the Baja Blues Fest, donated 20 copies of their children’s book “Wookivoo” to the LMCF/BECA. The Rotary of La Mision has been an excellent partner, but they can’t do it all. For those wishing to help, donations of clothing, foodstuffs, toiletries and sanitary supplies may be left at the La Salina Bar/Restaurant in La Mision.

Friends of the Library past President Susan Shea informed all of us that a UNESCO study rated Mexico in last place in reading, of the 30+ countries studied. That’s sad, but not unexpected from a country that expects students to graduate from the educational system at grade 7! The Friends of the Library promotes reading, not only in libraries, but in schools and in the home. Book donations service all five Rosarito area libraries, a pop-up mobile library that operated in the Reforma last summer, and a new reading room at CEART. FOL has just raised the funds to purchase a bus to be outfitted as a bookmobile, and the funds from the Blues Fest will be used to outfit this new bookmobile. Other forms of income are the spring Home and Garden Tour and the Holiday Home Tour before Christmas.

Los Angelitos was the singular orphanage to benefit from this year’s BBF. Ed Perry manages this home of 20 wards of the court in the Rosarito-Tijuana area, children with nowhere else to go, assigned by the Department of Social Services. Here they enjoy a non-institutional family-style quality of life. The children spend most of the week in their home in Tijuana in order to be closer to their schools. They spend weekends and vacations in their home in the hills between Rosarito and Tijuana in a much healthier atmosphere. Ed receives no government money but operates with donations from friends, the Rosarito Beach Christian Church, and his own monthly Social Security check. About 90% of the operating costs come from angels in the United States. The orphanage does not host fundraisers throughout the year. Mari Cruz, who grew up at Los Angelitos, is in her third year of university, earning a degree in Business Administration, and was very thankful for the opportunities provided to her.

For those keeping score, there wasn’t quite as much money available for the charities in 2018 as in years past. This year there was a major reorganization of powers at the Rosarito Beach Hotel, host hotel of the Baja Blues Fest, and the Hotel’s Board of Directors is now managed by Hugo Torres’ five children. Apparently they, and the HOA of the Rosarito Beach Hotel Condos, are not as charitable as patriarch Hugo has been. The use of the hotel grounds ran more than $8000 (USD) more than last year, and next year is looking even more dismal. Reportedly, the RBH declined to help defray some of the costs that they had helped to pay for in the past. As many of Rosarito’s community organizations have discovered, the RBH is harder to deal with now, and not quite as charitable as they have been in years past. But life goes on.

Needless to say, the BBF Board of Directors is searching for new venues for the 2019 music fest. The Friday night Meet and Greet Music Jam and Dance may be held at a location different from Saturday’s Blue’s Fest. The new venue does not have to be a hotel, as long as it is in the Rosarito area and has lodging nearby for the musicians and out of town guests. The new site will be a better opportunity for vendors and food purveyors, who were severely limited in their offerings this year, not being allowed to serve anything but desserts and sides. No flames allowed meant no spiral cut potato on a stick for me. I want my skewered fried potato…or six. The Blues Fest Board has decided to suspend the Sunday jam session (at least for 2019). This would save the cost of one day’s lodging, food, and venue rental.

The BBF Board is also seeking local businesses and community members as sponsors for bands (lodging, food, transport, etc.) or other costs related to the Blues Fest. Now is a good time to get involved with the Baja Blues Fest. It’s important to keep this an annual cultural destination. The BBF Mission Statement proclaims “promoting northern Baja as a safe and fun place to visit, bringing the residents from the northern and southern boundaries of…Rosarito together.”  Their purpose is to raise money for qualifying charitable organizations that cater to children in Baja California, “expand the cultural activities of our (Rosarito) area.” BBF’s tagline says it best: “Helping Kids with ‘The Blues’.”