Does this story sound familiar? You’re tired of your job, even if you love it, and you decide it’s time to retire. You move (to make sure you won’t go back to work after a few months) to paradise. It’s beautiful, you love it, but you’re bored. So you decide to return to the job you love, but now in a new location. After all, there is only so much beach volleyball and tennis one can play.

This is what Nannette Barbera experienced, and “DIVAS…the Show” was born. Every third weekend of the month until November, a new variety show will be performed in the beautiful plaza of the Mata Ashta Restaurant located in San Antonio Del Mar, Friday, Saturday and Sunday, 7:30 and 9:00 pm. The patio will be elegantly transformed each month with a new theme, décor, and mood. Future shows will include magic, comedy, burlesque, Motown, variety and more.

Performing on the domed stage the premier weekend is Ninette Terhart (direct from Las Vegas) and local talents, Theresa Mala and Tina Marie. Host Rick Rumbaugh will be on hand to entertain with his own brand of humor, but the main theme of these (and future) glitzy-yet-classy shows is to honor and empower women. And although there are two shows per night, each will have unique costumes (designed by Nannette), tunes, and performances, with each evening culminating in a slam-bang finale, and then dancing to a variety of music until midnight with a local DJ. And there is a special guest appearance, to be announced! This month, Baja Lori Chapin will be on hand to offer tequila tastings. 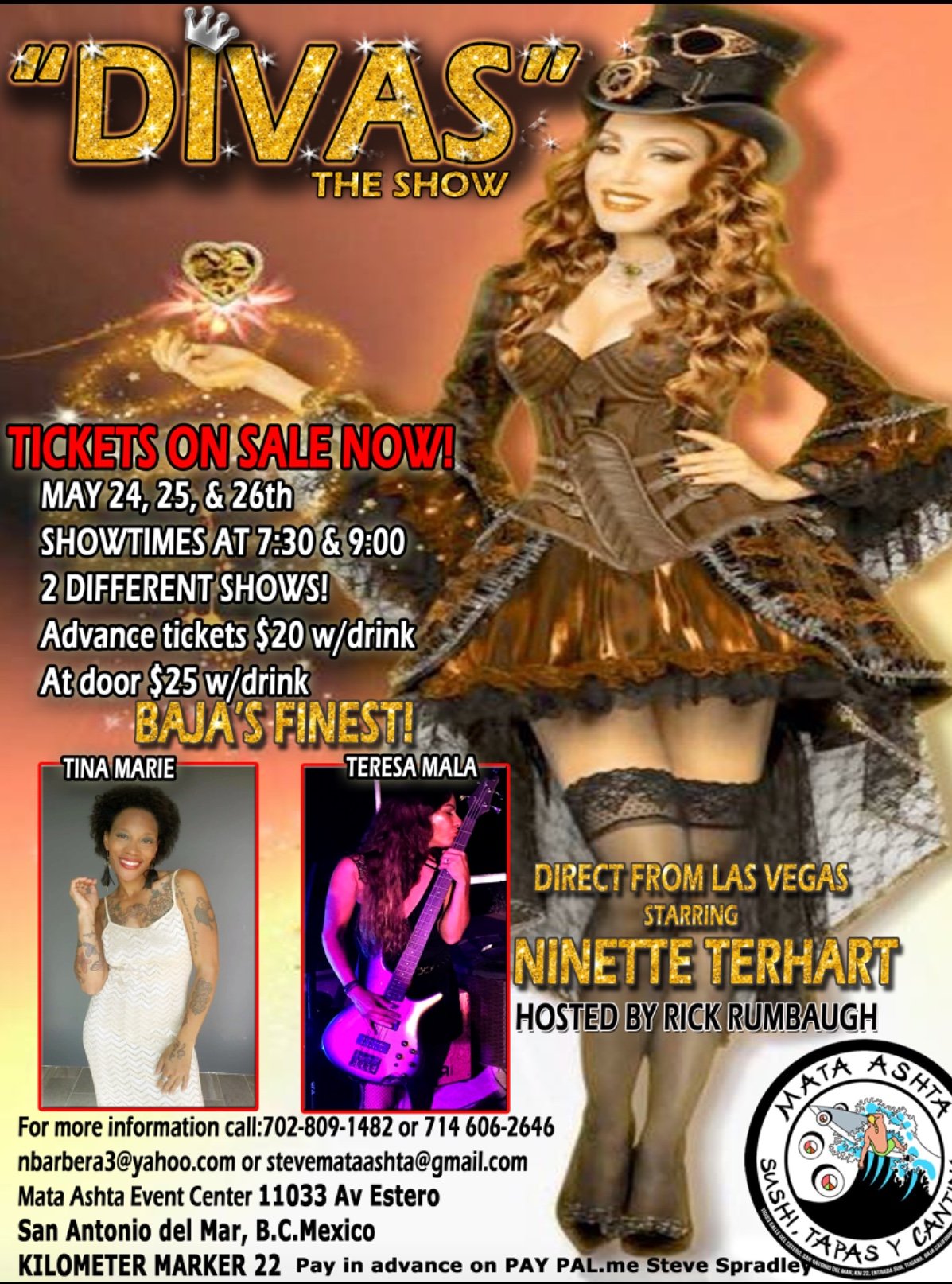 Nannette is no stranger to staging live entertainment. After 17 years with  Caesar’s Entertainment as Entertainment and Special Events Coordinator, she produced and choreographed  such stellar shows as “Dance Mania,” iCandy” and “Solid Gold Soul,”  as well as the television shows Star Search, Leno and Howie Mandel, among others, and now she’s brought her expertise and abundant energy to Rosarito. Her partner Buford King, who co-produces her shows, accompanied Nannette to Rosarito. When they discovered Mata Ashta after moving to San Antonio Del Mar, Nanette became the Special Events Operator for the property, and does much of its marketing.

Tickets are $20 in advance (PayPal.me/SteveSpradley or at Mata Ashta) and $25 at the door, which includes the show and your first drink. And this is a family-friendly show, so the kids get in for $10. But hey, if you come for the first show you can stay for the second on the same ticket. But that’s not the only great deal. If you mention the Gringo Gazette when purchasing your ticket, you get $5 off. And if you purchase your ticket at Mata Ashta any day before the show date you’re interested in, the Steve’s Special will include a raffle ticket entering you into a drawing for a $50 Mata Ashta gift certificate, to be held every Monday following the shows. Winners will be notified and their names posted on Mata Ashta’s Facebook page. Steve is the owner of Mata Ashta and head of promotions, so I guess he can offer any special he wants to.

There will be a different show each month until November, then after a brief hiatus, during which Nannette will be creating new shows and costumes, the show will return to Mata Ashta next spring.  And Ms. Barbera is always looking for new talent to add to her shows. In addition to looking world-wide for new acts to include into future shows, she is looking for local talent. So if you are a performer of any kind (musician, singer, juggler, comedian, magician…the list goes on and on), please contact her via email at [email protected] with a description and video of or link to a video. For more information, email [email protected], or phone 1-702-809-1482 or 1-714-606-2646.