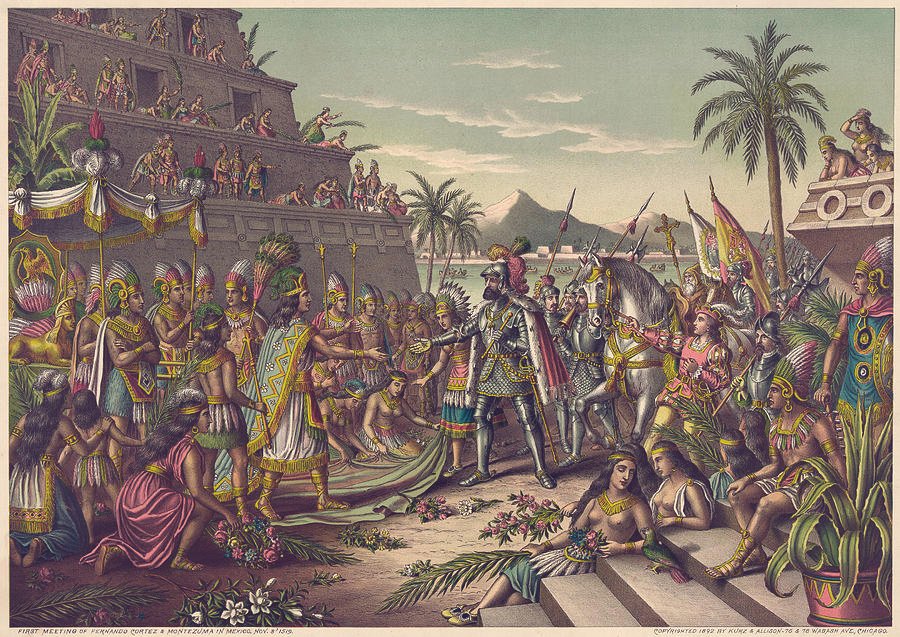 There’s big money in the apology-extraction business today, as compelling a mea culpa can be a prerequisite for demanding reparations.

So perhaps it’s no surprise that Mexico’s socialist president Andrés Manuel López-Obrador recently demanded an apology from Spain for colonial conquest. What is surprising in this age of the cowardly kowtow is Spain’s response:

As EL PAÍS reported Tuesday, “Mexico’s leftist leader Andrés Manuel López Obrador, of the National Regeneration Movement, recently sent a letter to the king of Spain, Felipe VI, urging him to acknowledge these abuses (of the conquistadors a half millennia ago) and to ask for forgiveness so there can be full reconciliation between both countries.”

In a release, however, the “Spanish government said it ‘firmly rejects’ the arguments contained in the letter, which was sent to the monarch via the Spanish Foreign Affairs Ministry,” the site continues.

“‘The arrival of Spaniards 500 years ago to present-day Mexican territory cannot be judged in light of contemporary considerations. Our brother nations have always known how to read our common past without anger and with a constructive perspective,” said the Spanish government in its statement.

American Thinker points out that Spain’s socialist ruling party might have had to respond robustly because it’s threatened by the conservatives in an upcoming April 28 election. Nonetheless, robust the response was.

To wit: Foreign Minister Josep Borrell said on Tuesday that he “deeply laments the request by Mexican President Andrés Manuel López Obrador” and that, “obviously, Spain is not going to offer such an ‘extemporaneous apology.’”

Unsurprisingly, the leader of Spain’s conservative PP, Pablo Casado, went even further. Calling Mexico’s demand a “veritable affront,” he unabashedly stated, “I don’t believe in Spain’s black legend. Not in the one that was drafted centuries ago, and not in the one that the complex-ridden left is now trying to draft. We are one of the most important nations in the history of humanity.”

The first thing to wonder when considering Mexico’s demand is, who would apologize to whom? Mexico’s ruling class is largely of Spanish descent (and white), and the nation speaks Spanish and is of Spanish culture. It’s a bit like us demanding an apology from Britain for … what? Helping create us? Would we rather not be?

This brings us to perhaps the best way — the “best defence is a good offence” way — to counteract the apology mongers: The West should demand thanks.

Consider that Spanish explorer and conquistador Hernán Cortés had conquered the Aztec Empire (in what would become Mexico) with 500 of his men — and approximately 100,000 natives from neighboring tribes. Why did they help the strange European aliens?

Because they’d been oppressed and brutalized by the Aztecs for ages.

So, question: Will Aztec-descent Mexicans apologize to almost everyone else?

(Oh, yeah, there’s no percentage in demanding such; they’re not a Mr. Money Bags.)

Note, too, that the Aztecs engaged in human sacrifice on a massive scale, tearing out victims’ still-beating hearts and hanging their body parts in the marketplace. Perhaps the West deserves thanks for ending such practices not just in Mexico, but the world over.

Yet more perspective is needed.

As I wrote in January: In truth, we all had ancestors who once were conquered or colonized. And the European tribes subdued by the Romans surely had many of the same complaints today’s grievance groups do: that their cultures were being trampled, their values eviscerated. Yet should we lament those Roman conquests and demonize Italians?

In reality, we’re all better off for the Romans having spread Christianity, Western civilization, and technology and having built infrastructure throughout Europe (e.g., roads, aqueducts, amphitheaters). We still today use much that they birthed, too, from our calendar to concrete to plumbing to sanitation to fast food to trademarks and beyond.

The Romans, of course, had gotten much from the Greeks and Etruscans. This Western civilization then spread to the rest of Europe; later to the Americas, Australia, and New Zealand; and to a lesser extent elsewhere, influencing and enhancing the whole world.

Thus did a Zambian man I knew once argue that African colonization was good; it’s why a fellow from India I knew despised Mohandas Gandhi (who was phony, but that’s a different issue), condemning the Indian leader for driving experts and expertise from the country. Shocking? These men understand how civilization spreads.

Consider also that when Europeans reached the New World and Africa, the natives were generally living stone-age existences. “Noble savage” suckers may romanticize this, but have no intention of withdrawing into the wilderness to live like the Sentinelese. They love the modern conveniences, luxuries, and prosperity the West birthed far too much. Thanks, anyone?

Moreover, whether it was the dominance of other tribes by the Aztecs, Africa’s Shaka Zulu, North America’s Lakota, Asia’s Attila the Hun, or some other entity, conquest, killing, and subsumption had ever been part of man’s history.

That is until the West finally put an end to it.

In fact, as of late, Iraqi dictator Saddam Hussein’s 1990 invasion and annexing of Kuwait is evidence it likely would still be occurring today were the West not around to uphold Western standards.

Add to this the West ended slavery (where it could), cannibalism, and all other manner and form of age-old pagan brutality and, well, what can we say?