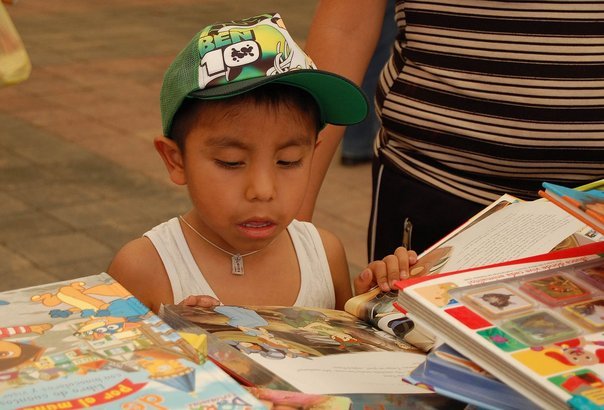 The Friends of the Library have been busy this winter. For years the FOL has realized that much of the local population does not have access to local libraries. Last summer, a pop-up library was opened two days a week in the Reforma area and met with some success, but this only aided a small segment of Rosarito. The FOL Board then set their sights on obtaining a mobile solution and settled on the idea of obtaining a bookmobile.

After many months of searching for the right solution, they located a small bus in the United States that could be successfully converted into a mobile reading vehicle. After many months (and many dollars), the bus was approved for entrance into Mexico. Much thanks to Len Merson and the FOL Board members who spent a lot of time and money on getting the necessary approvals for the bus’s import to Mexico. But it is still just a bus. Much more money is needed to convert the bus into a mobile library.

And some of that money comes from unusual places. Leonardo Galvan, a young man in Canada, sent his uncle, a member of the FOL Board, $100 Canadian that he earned while house sitting “so hopefully you can get some stuff with that,” when he heard about the multiple fundraisers that the FOL was hosting.  Now if a child donates his hard-earned money to another far-off country (even if it is Canadian), we locals can pull together a few dollars for the effort.

On March 30th, the Friends of the Library will hold a gala at CEART (current home of said bus and future bookmobile), introducing Rosarito to sculptor, Pancho Jimenez.

If that name sounds familiar, it is because the sculptor is the son of author Francisco “Panchito” Gomez, whose books Rosarito has been reading for many years now, and the subject of the Copa Panchito reading tournaments held each spring.

The Gala concludes the Celebration of Literature, Arts, and Culture event March 28th – 30th, which includes the 2019 Copa Panchito Finale with Author, Dr. Francisco Jimenez at the Plaza Municipal; an Academic Forum on “The Transformative Power of Education and Literature” on the 29th, and a “Meet and Greet” with Sculptor Pancho Jimenez and local artists before the Gala on March 30th. Complete information on these events may be found in the Gringo Gazette Calendar section.

The Gala will be preceded by photos taken on the red carpet in the CEART courtyard. In the foyer, Hors D’oeuvres prepared by the renowned Plascencia Group and Dessert by Brown Dog Gelato, will be offered with wine and other beverages prior to the Ceramic Sculpture Exhibit ribbon cutting. Tickets to this event are available at the FOL website, www.friendsofthelibrary.com.mx.

Sole exhibitor in the main gallery, Sculptor Pancho Jimenez, holds an MFA in Sculptural Ceramics from San Francisco State University and exhibits mostly in the San Francisco Bay area, but has also been exhibited in universities, private galleries and civic spaces. He has been featured in the Ceramics Monthly, and “art ltd” proclaimed his solo show at Santa Clara’s Triton Museum of Art “one of the Top Ten Best in Northern California.”

Pancho Jimenez began working with clay at a young age. With a background in history as well as art, some of his influence comes from the ancient ruins of Mesoamerica. Jimenez’s work assigns meaning to symbols which is apparent in every piece in his exhibition.

His work is comprised of several series including the “Head Series,” influenced by pre-Columbian Olmec Heads; “the “Carved Series,” displaying meaning he has found in the ruins of ancient Mexico that captures the “mystery, that ‘eternal presence’ of ancient art forms”; and the “Memory Series” depicting dense carved geometric and organic designs sometimes found in ancient art. He has graciously (and lovingly) conveyed many pieces of his extensive collection to Rosarito especially for this event. Jimenez has donated one piece to be raffled off to one of the lucky VIP ticket-holders at the Gala.

But that’s not all. Another new addition to the Reading Program of Rosarito is the new public reading room at CEART Rosarito, dedicated on a gloomy rainy January 31st. The ribbon-cutting ceremony included dignitaries including Mayor Mirna Rincon, and Rosarito IMAC and CEART department leaders including Xochitl Contreras, Marco Nunio, and Armando Gonzalez, who is also the VP of the FOL.

The new Reading Room was painted, furnished and decorated by the Board of the Friends of the Library with artwork and furnishings from their homes. Additional bookshelves are being built for the adult portion of the reading corner.

The books in the collection include modern favorites, the complete Harry Potter series and the books of Francisco “Pancho” Jimenez. Whereas the books are of interest to readers of all ages, they primarily focus on younger-aged readers. The reading corner has become so popular that many new books are needed, especially for the younger children. Attendance to the CEART reading corner starts when the building opens in the morning and the last reader is ushered out at closing time.

Originally funded by the FOL, Marco Nunio’s office will begin funding 7000 pesos per month through CEART to hire a full time person to staff the reading corner. But this funding may not be permanent so the fundraisers may help to support this position as well as fund the bookmobile, purchase books, and other programs the FOL sponsors.

Tickets and $20 memberships to the Friends of the Library may be purchased online at their website, www.friendsofthelibrary.com.mx. Their monthly meetings are held the second Wednesday of every month and are open to the public. For more information, please visit their website. And remember their motto: Read today for a Quality of Life Tomorrow.