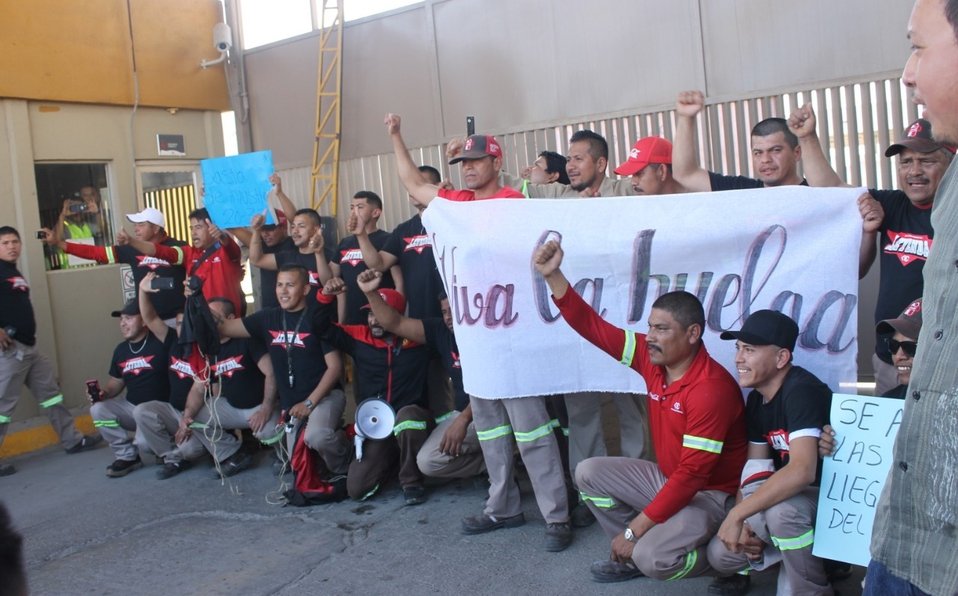 Biggest Train Heist Ever. Teachers in the state of Michoacán have been camping out on the train tracks, so far shutting down 250 trains. They’re demanding money for when they were striking against taking a competency exam. Now they’re threatening to escalate their protest by barricading banks, shopping centers and highway toll booths.

In dispute is about US $263 million, and it’s hard to see how the government is going to avoid paying this without incurring bloodshed, as these people are parking their pillows on the tracks.

The government is admitting the teachers are racking up a loss to the economy of $52 million a day because the blockade is causing a shortage of supplies such as steel and automotive parts, which is beginning to impact a variety of people. Mexican companies that export products are also racking up losses because they can’t get their goods to the ports.

The president of the Business Coordinating Council said its time for the federal government to clear the tracks, stating, “We cannot allow railway tracks to be subject to political extortion by minority groups.”

The president of the Mexican Employers Federation urged the government to end the blockades, although he emphasized that teachers’ human rights must be respected.

Yeah, as in don’t squish them on the tracks, but do get them to move along. This is a toughie.

Who’s the biggest thief of all? Real estate developers spend between 5% and 10% more on a project, just for the bribes they give to whoever regulates them, the NGO Mexicans Against Corruption and Impunity (MCCI) reported Tuesday.

The most corrupt or with the highest perception of corruption are the mayors, then other authorities related to bribes would be Urban Development and Housing, and then the Water Authority.

According to the document, the “most common” forms of corruption are the fees of about $1,000, the request for an apartment from the work, the obligation to hire a specific contractor, or even to carry out works in public buildings.

Bribes also include personal gifts such as tickets for the Formula 1 race for officials, demolishing homes affected by the 2017 earthquake, or fixing parks.

Of the respondents to the poll, 94% said they had been victims of extortion or corruption, but only 36% reported it, in part because 42% do not trust the authorities. Gosh, why not?

Dog attack! Dogs attacked a woman as she walked to work over on the mainland.

Surveillance video showed a 34-year-old woman was killed by a pack of 11 dogs. The video indicates the attack lasted 11 minutes. Her body was discovered the following day. The Mayor ordered animal control agents to round up the dogs, but area residents attempted to prevent them from doing so by hiding them. However, the mayor said several had been captured.

Governor bails. After 5 years, a former governor of Sonora was let out of jail on $2 million bail on charges that his administration swiped $1.6 billion while he was governor. Poof! Gone. Well, maybe under his mattress? Has anybody looked?

Goodbye Plastics. This coming August may be the soonest the new law against plastic bags and plastic straws will go into effect. The law was approved last July, but these things, (as all things in Mexico), take time.

We recently used a paper straw and that fell apart after sucking up most of one drink. The straw felt weird, too. But maybe we’re just a strong sucker with sensitive lips

The biggest change will be not having to deal with those cheesy Wal-Mart bags that are so small and so skinny they can only take a few items. As you’re pushing your cart out the store, you look down and see a sea of thin opaque plastic waving and clattering in the breeze.

BYOB, (bring your own bag), has been the deal in some US states for a little while now, and it’s doable with surprisingly little effort. Just always carry a cloth bag in the trunk of your car. Even this dull bulb got used to it in about a month.

And if you forget to BYOB? Hopefully they will sell you their cheesy ones. But you will look pretty irresponsible pushing out of the store with that sea of plastic bobbing around in your cart.

Now, 150 employees at a dairy bottling plant walked off the job as did 170 workers at a water purification company.

The non-unionized employees of the bottler said their salaries only increased by 1% at the start of this year when the minimum wage was doubled in the northern border region. They too want a 20% increase and a $1600 US bonus.

Some striking workers, who are calling for the same raise and bonus, denounced what they called exploitation by their employer and condemned the indifference of the union to their cause.

They said they expected to receive an annual bonus of US $525 last year but got just $65.

The strike action by employees of those two companies followed a work stoppage Thursday by workers at Arca Continental, the second largest Coca-Cola bottler in Latin America. The workers are also demanding a 20% pay raise and $1600 bonus.

“The plant and the distribution of products stopped,” said of the Mexican Employers Federation,

The president of the National Council of the Maquiladora Industry (Index Nacional), said earlier this week that strike action in Matamoros will result in 15 manufacturers leaving the city.