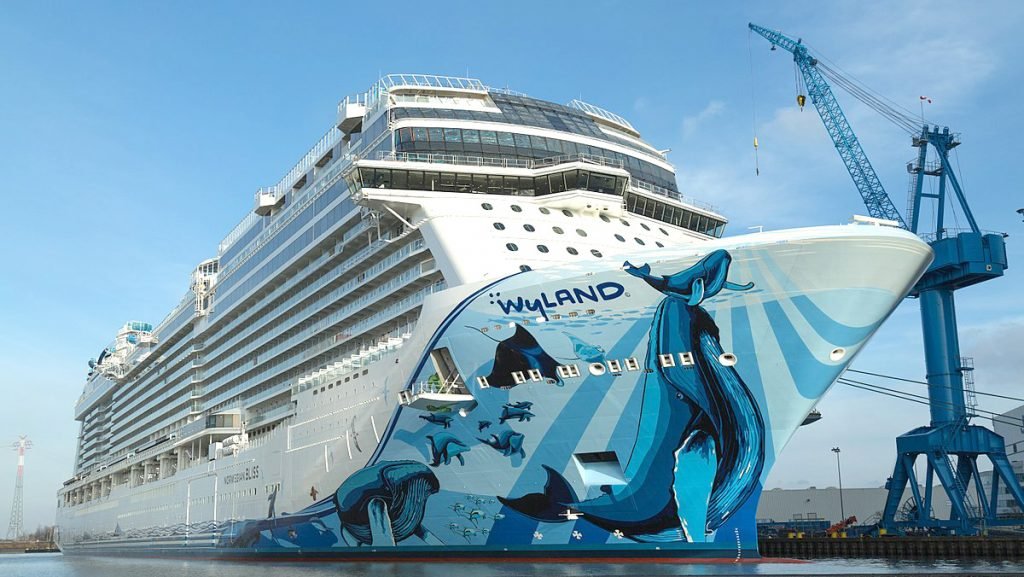 The largest cruise ship in the Norwegian line dropped anchor in Ensenada’s bay for the first time on Saturday, October 6. It did look big, from wherever you viewed it.

the Norwegian Bliss will set sail from the Port of Los Angeles for a few week long voyages to Cabo San Lucas, Mazatlán and Puerto Vallarta, before squeezing through the Panama Canal to ply the Caribbean route for the winter season.

This past summer it sailed between Seattle Washington and Alaska. It had to wait for low tied to go under the Lions Gate bridge on arrival in Vancouver British Columbia.

The newly built Bliss is Norwegian’s largest cruise ship, and has an onboard go-kart race course, a water park, Broadway theater shows, and a very cool sounding laser tag arena. Some people don’t like such big cruise ships, so there is a separate upscale section, called The Haven that offers quieter, more luxurious accommodations. Away from the unwashed masses, one would presume. Well, we presume.

The big boat can take up to 4,900 passengers, mostly in 170 square foot balcony rooms, but there are 2206 rooms total, in 42 categories on 11 decks. Altogether there are 20 decks It takes about 1700 crew to keep it all organized. Top speed is about 26 miles an hour, and the $920 million ship gets about 3,000 gallons an hour.  That’s 3000 gallons to move the ship 26 miles down the road. Sounds expensive, but with 4000 passengers, that’s only about three quarters of a gallon per person per hour.