The rest of the world has suddenly caught up with the sad story that has been followed in Baja California for many years and it has taken the shy little vaquita porpoise to become the most endangered marine animal in the world to bring it to everyone’s attention. You may well ask how in today’s modern world of wisdom and conservation awareness, we are now accountable for the rapid demise of this unassuming porpoise. It’s a story that began back in 1958 when the vaquita was first recorded as a species in the Journal of Mammalogy.

At only around 5 feet long and weighing less than 100 pounds, the Vaquita is the smallest of the porpoise family. They reproduce only once every two years or so, produce one calf normally at the beginning of spring and are found only in the Sea of Cortez. The name means “little cow” in Spanish and they are also nicknamed “panda of the sea”, due to their chubby frame and black-ringed eyes. So far, so cute but here the story takes a darker turn into one of greed and the criminal underworld.

As far back as the 1980’s the vaquita began to ring alarm bells in the conservation world as they realised that 7-15% of the population was becoming unintentionally entangled and drowning in gillnets used by fisherman to trawl for shrimp and finfish and later the prized totoaba, every year. In 1985 the vaquita was listed under the U.S. Endangered Species Act and a year later listed as vulnerable on the International Union for Conservation of Nature Red List of Threatened Species.

When the first official population count was made in 1997 it was estimated that there were less than 600 left and for the next eight years continual lobbying of the Mexican government by the likes of the International Committee for the Recovery of the Vaquita (CIRVA), founded by a global group of scientists in the same year, won a small victory – a vaquita refuge was established in 2005 but gillnet fishing wasn’t totally banned until 2015 with compensation offered to fisherman and associated fishing industries as a sweetener for the loss of income.  As the vaquita only reproduces every two years that was never going to be a long enough recovery period. 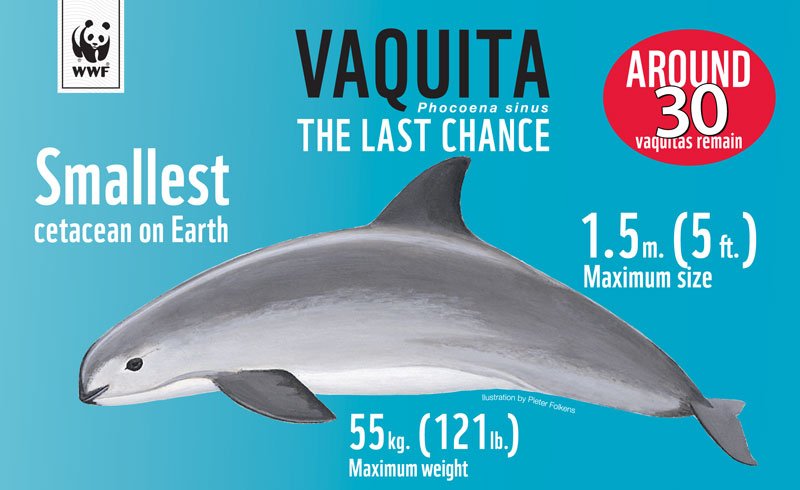 Although fishing for totoaba (they too are unsurprisingly on the endangered species list) has always gone on – it exploded into big business back in 2011 when the Chinese market turned to Mexican waters to supply the ever-growing demand on the Chinese black market for the swim bladders (or maws) of the totoaba. The maws are used in a soup and alleged to contain medicinal properties for blood circulation, joint pain and improved skin complexion amongst other attributes.  They are a symbol of wealth and have on occasions been used as a source of investment or traded as currency and in some Chinese homes are framed and hung on the wall.  Selling on the Chinese black market for around 20,000 USD per kilogram, it is no surprise that they have become known as the “cocaine of the sea” and of course where there is easy wealth to be made, regardless of the law or the consequences, there will always be those waiting to swoop in for the spoils.

Even with a ban in place and financial compensation, the lure of cash that could be made illegally fishing totoaba versus legal fishing was just too great for some and so gillnets continued to be used, the vaquita continued to die, and a chain of people continued to make money. Since 2015 the vaquita population has continued its rapid decline to just 59 in 2016, 30 in 2017 and now there are only a dozen left.

In 2017 vaquita CPR was born, a collaboration between the Mexican government and a group of international experts and scientists, to rescue and relocate remaining vaquitas to an ocean sanctuary with the additional hope of a breeding programme to increase their numbers. They managed to capture two vaquitas – a young female who had to be quickly released due to signs of great stress and a more mature female who initially appeared to be less ruffled by her situation.  All was going well until she arrived at the state-of-the-art floating sea enclosure where she proceeded to swim into the nets and show deep signs of distress eventually leading to her death which scientists believe was caused by heart failure. Broken-hearted by the results, the group realised they could not risk any more deaths and the project was abandoned.

In the same year, A-lister Leonardo DiCaprio and Mexico’s telecommunications billionaire – Carlos Slim, met with President Enrique Pena Nieto to pledge their respective foundations support to the plight of the vaquita. In November 2017, Sea Shepherd – the international ocean conservation organization, put Project Milagro IV in place. Milagro means “miracle” in Spanish and right now that is exactly what the little vaquita porpoise needs. With two ships patrolling the vaquita refuge they are removing gillnets, patrolling for poachers and taking partial blame for the U.S. ban on seafood harvested by gillnets in Mexico’s northern Gulf of California.

A lot of people are putting their hearts and souls into saving the Vaquita but there are many more ominous twists to this tale and you can read more of this story in the poignant but sometimes disturbing “Vaquita – Science, Politics and Crime in the Sea of Cortez” by Brooke Bessesen which came out last week or wait until next year for Terra Mater Factual Studios, the movie and TV production arm of Red Bull to release their documentary – “Vaquita: Sea of Ghosts”.

The documentary begins with the meeting between Leonardo DiCaprio and Pena Nieto in May 2017 and follows the increasingly violent conflict between the Mexican drug cartels and Chinese crime gangs on one side and the Mexican government, U.S. Navy, FBI, Sea Shepherd and other wildlife activist groups on the other. Scriptwriters are no doubt hurriedly adding the latest instalment following the arrest on Thursday 13th September of an alleged drug cartel hitman with strong links to the Sinaloa cartels known as “El Parra” who was hauled in with accusations of trafficking the critically endangered totoaba fish amongst other serious charges and subsequently if not surprisingly released again a week later.

So, will the vaquita be saved? That remains in the hands of the gods, but we would be wise to remember that 14 known breeds of our wildlife have already become extinct in the 21st century, mostly due to our destruction of their habitats or hunting and do we really want the vaquita to be the 15th in our legacy?

Writer Brooke Bessesen hit the spot when she said, “I learned that conservation is a messy business”.