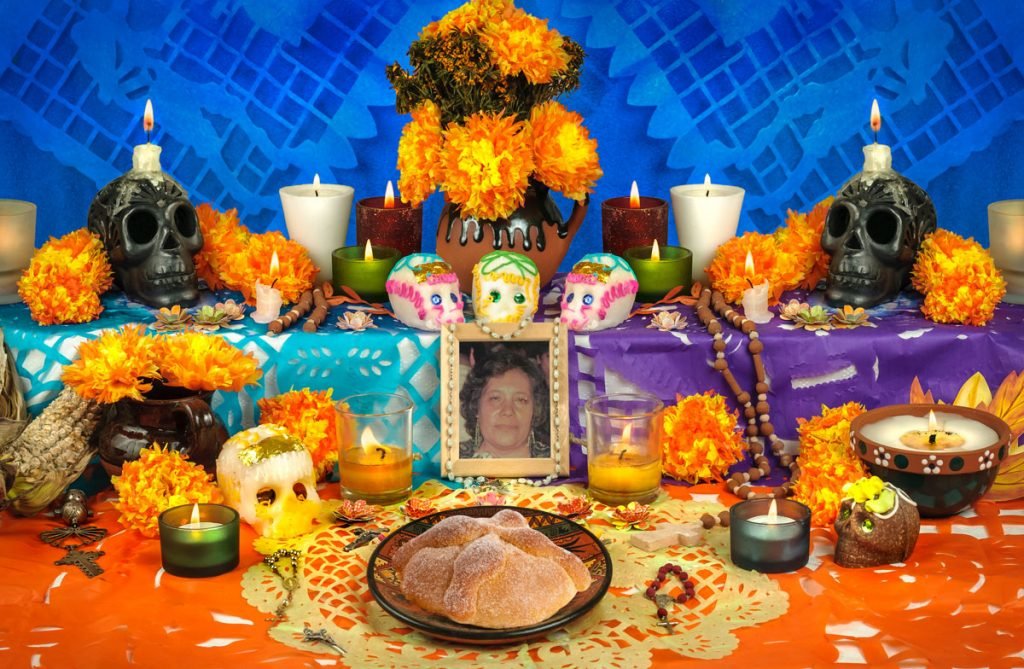 Dia de muertos or day of the dead is a famous Mexican tradition. It is a day to honor the dead, but it is also a day to make fun of death. You have seen it in many movies, but most of the big screen depictions I’ve seen picture it wrong (I haven’t seen Coco by the way). Today we’ll give you the real story. First we will start with its origins:

Before the Spaniards came to Mexico, the day of the dead was already being celebrated. There are historical registries of this tradition in the cultures of the Mexica, Maya, Purépecha and Totonaca ethnic groups. The ritual of celebrating the life of the deceased has always been part of Mexico. In the pre-Hispanic world it was a common occurrence to keep the skulls as trophies and exhibit them in the rituals that celebrate death and rebirth.

The cult of death: When somebody died festivities were organized to guide his soul through its journey across the underworld. The body would be buried rolled up in a “Petate” and personal objects along with his favorite food would be placed in his tomb in case he got hungry.

The most important aspect of this celebration is the ofrenda or offering. On this day it is believed that the souls of the dead come back to be with their loved ones, that is the reason of the offerings. Some of the ancient beliefs link this offering to the four elements: Water, air, earth and fire: Earth is represented by the fruits in the offering. This are usually pumpkins, tejocotes, tangerines, sugar cane and oranges. Water is placed in a jar to calm the thirst during the journey. Fire is present trough the candles, there are usually four candles that represent the cardinal points to guide the soul. Wind is in the copal and incense burned and it is believed to mark the way for the deceased to follow.

Altars are placed with the offerings to celebrate the deceased’s loved ones. These altars are usually set up at home and  decorated with zempasúchil  flowers surrounding a picture of the defunct person all this on top of a white mantle. You can almost always find colored paper cut in ingenious designs decorating the altar.   And don’t forget one of the most famous and enjoyable offerings “pan de muerto” or bread of the dead which comes in a plethora of presentations and flavors. And last but not least the kids’ favored offering: Skulls made of sugar, often with the name of the person being remembered.

There are different variations on the celebration of this day according to the geographic location. In some places the number of steps in the altar represent the levels of the underworld the soul has to go through. There can be up to seven steps but most common is to have only two that represent heaven and earth.

In the present the date of this celebration is officially on November the 2nd  but the original tradition also has the first of November as the day to honor the dead children. The Catholic church calls this day the saints innocents day.  In some places the offering starts on October 28 until the official date. The Aztecs used to dedicate a whole month to this holiday but it all changed with the arrival of the Spaniards.

People often go to the cemetery with family and friends and spend the day there eating, drinking around the graves. They clean up the tombs and decorate it with candles and even spend the night there. Often there is live music in the cemetery making this a complete celebration.

There are many fun other traditions linked to this holiday. One of them is the calaveras: These are verses that depict a person as if they were already dead mostly in a satirical way. The verses date back to the Virreinal age, starting as a satire of the long dedications the rich people used to put on their loved ones’ graves. Later it became more of a way to do social critique up to the point the government censored them. After a while fun drawings of skeletons were added to the calaveras. The most famous artist in this venue was Jose Guadalupe Posada, He is the original designer of the Catrina character, whom you’ll recognize as the elegant rich lady skeleton you find in Mexican artesania.

The calaveras today are less political and more a fun way to express the feelings towards someone, whether it’s love, hate or critique. Often they are used as gifts to that person.

In November 2003 the UNESCO recognized The dia de muertos holiday as a cultural heritage masterpiece of humanity.