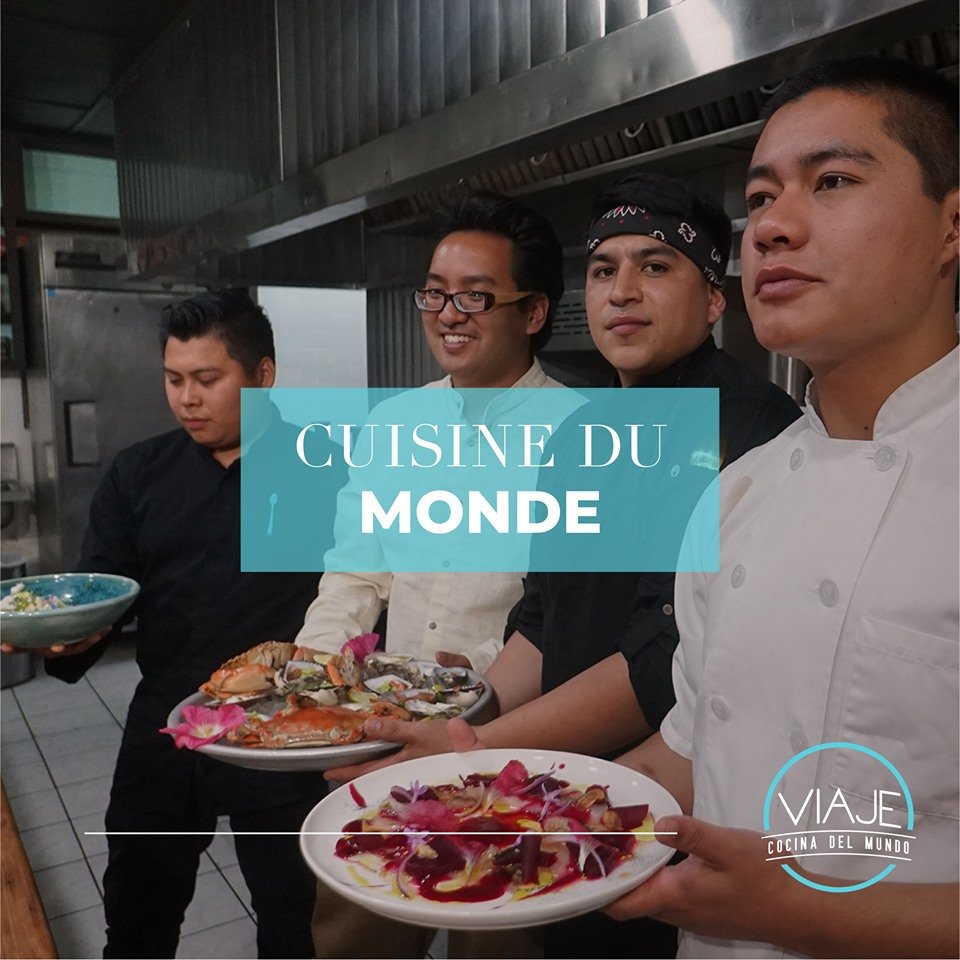 Tripping at Viaje is what I like to do on a mellow Sunday afternoon on the terrasse of the newer restaurant in town, VIAJE, COCINA DEL MUNDO.  Cool jazz from a 4-piece ensemble, a glass of Chardonnay, and having just polished off an order of enfrijoladas – a sort of chicken crepes in a luscious bean sauce redolent of pasillas chiles – takes me close to Nirvana, or maybe pig’s heaven with an ocean view.

Open with much fanfare in February, Viaje is located midtown Rosarito in the Quinta del Mar complex. You drive through the arch and it is a straight shot around the fountain.

The building had been a restaurant in a former incarnation some 15 years ago when it burned down.  In came Jerome Gombert, a talented and ambitious Frenchman with successful restaurant experience in San Diego (Vagabond in North Park).  He had the vision to turn the structure into the stunning establishment it has become. Assisted by designer Roderick Shade of Architectural Digest fame, he has created an airy, elegant, yet hip space. The design takes advantage of existing exposed structural elements: the cellar, the vintage tile and wide plank wood floor, and wall niches. It has two distinct areas: a refectory style room around an oyster bar with two dozen huge lanterns to offset the bare bone feeling; in sharp contrast you then proceed to an explosion of colors and textures for a 1001-nights feeling provided by kilometers of draped sari fabrics in the two cozy rooms adjoining the patio.

When alone, I sit at the bar for a chat with Jeser, the amiable bartender. As a bonus, it affords a full view of the open kitchen with pedigreed chef, Jonathan  Casas, and his team in action. Everything is prepared to order with mostly local ingredients: organic veggies from the Guadalupe Valley and seafood from Ensenada and San Quintin.

Viaje, meaning “travel” offers a culinary tour of the world with an eclectic selection of French, Peruvian, Moroccan, and Chinese preparations.  I have not tried it all, but the steak tartare is for me a near addiction: chopped to order fresh sirloin with assorted spices. Jonathan’s rendition of bouillabaisse, the French fish soup, is another favorite.  If you are fussy about your oysters, you’ll love these plump, sweet on the shell – the best anywhere.  My companions have raved about the various ceviches which  I have not tried yet, but looked like works of art.

Several times, the attendance was minimal making me think that Viaje has not yet appeared on everyone’s radar.  I have heard that some folks are intimidated by the exotic touch and fear high prices. In reality, the prices are reasonable and the place is unpretentious as is Jerome whose hospitality makes you feel at home. As of this writing, there is a happy hour from 5-7 on weekdays with music on Friday. Try it, enjoy it, and why not toss a coin in the fountain on your way out.