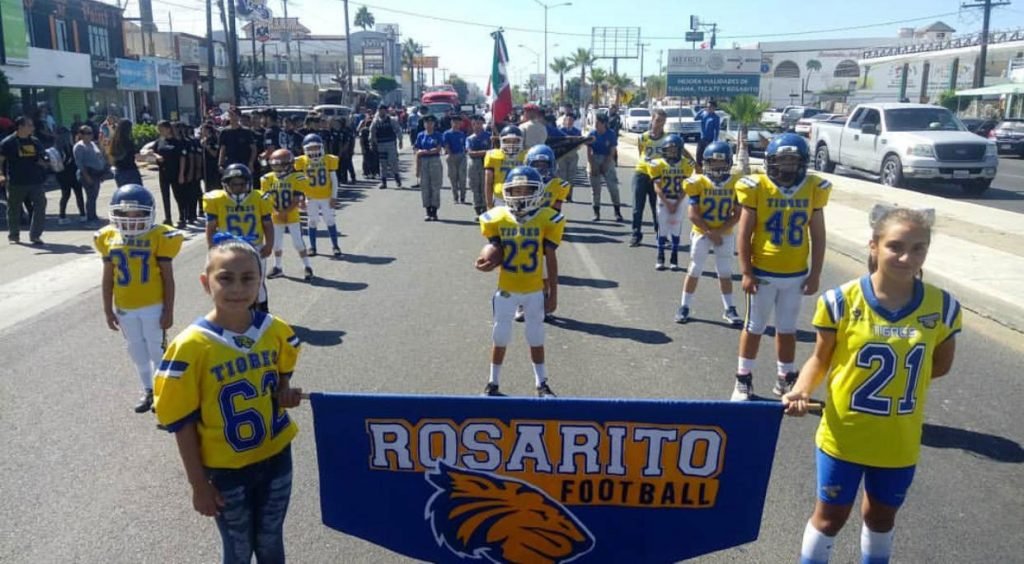 When many of us were preparing to gorge ourselves Super Bowl Sunday on hot wings, pizza, and beer, more than 400 slightly more athletic individuals (some in Lucha Libre masks) participated in the “Donate One Yard 5K Run Trot Walk” from the currently-being-renovated Hotel Festival Plaza to the Hotel Castillos Del Mar, and back.

Did you know that Rosarito is the only major city in Baja without a dedicated American-style football field?  We don’t even have a plot of land large enough to be used as a regulation football field, with stands and parking. Francisco Beltran, President of Student Athletics A.C., is trying to remedy that with his “Donate One Yard” fundraising campaign and events.

Francisco, head coach and founder of BajaFootball.org, was joined by Ricardo Cabralez, Alderman of the Youth Sports Commission, Jesus Gastelum, Director of IMDER, and Manuel Esteban Padrez, Manager of the Hotel Festival Plaza, in welcoming participation in the 5K, or to donate to the cause.

Many American expats in Rosarito are from the Pacific coast where the only “Friday Night Lights” we remember are those on the tops of police cruisers when we were up on Mulholland Drive or cruising on Van Nuys Boulevard. But Friday Night Lights were important to a big part of the United States. Wouldn’t it be nice to look forward to that again? (No, I’m not talking about cruising Van Nuys Boulevard).

It has been shown that participation in sports makes for better students, and at a time when sports is being driven from schools, other after-school sports are even more important. Francisco’s passion comes from playing American football since he was 14 years old, and continuing in a San Diego high school. He attended college in Monterrey and obtained a degree in Sports and Training.

The cost of a square yard of field is $62 (US) which includes the turf, a base of gravel and sand, and labor. The total amount needed is about $600,000, so there is a long way to go, and major sponsors, such as local businesses are being sought to help out.

There are three divisions of players (8-10, 11-12, and 13-14 years of age). Individual player sponsorships are also available at $43 per month, which coves one player’s complete fees, uniform, and equipment. You can even choose the player by going online to the bajafootball.org website. Player sponsors will be kept updated on a player’s performance, not only on the football field, but also in school as well.  And one-time donations of any amount are appreciated, and will be used where needed most.

To be honest, some of the money being collected now is funding the preparation of a US 501(c)(3) certification. Francisco knows that Americans are much more likely to write bigger checks if there is the possibility of a tax deduction involved (or is that just me?).

The Rosarito Tigers football team started one year ago. It’s been found that a major challenge is not only a monetary one, but one of culture. The community, and Mexicans in general, don’t understand American football and its importance. Why try to improve on soccer, right? Little by little American influence is creeping into Mexico, making American-style football more acceptable, but it’s slow-moving. In the future other nearby cities will come compete with Rosarito teams. Local games are scheduled to begin in mid-March.

For more information on upcoming events and fundraisers, contact Francisco Beltran at www.Bajafootball.org.