The preservation of fish has been an integral part of every seafaring culture. Over the course of thousands of years of drying, salting, and smoking fish the technique has developed to a point where once common food has become a delicacy.

A smoker is an oven/BBQ type of thing for cooking at low temperatures in a controlled, smoky environment. There are a lot of different types of smokers, from small electric units to large fancy store bought smokers big enough to feed an army, literally.

Terry Byrns fishes a lot so he made his own smoker out of an early 1950s refrigerator. The old ones are all metal inside and out and are able to handle the temperatures that the new refrigerators could not because of the plastic interiors.  A refrigerator even comes with multiple shelves for a nice distribution of the meat.

Terry modified his refrigerator with adjustable air intake and adjustable air exhaust; the intake air comes in the bottom and the exhaust goes out the top. By closing or opening these he can control the temperature. Terry likes to use Kingsford charcoal briquettes as his heat source, then distributes chunks of hickory and mesquite he gets at Home Depot which he soaks overnight. He puts three or four chunks about the size of a baseball on top of the hot charcoal. These will smolder and create smoke inside the smoker and season the meat with that aroma. Terry believes Kingsford gives the best consistency and lasts the longest. 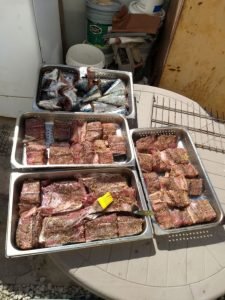 Fattier fish absorbs smoke better than leaner fish, but he smokes whatever he can catch. While any fish will be delicious cooked in the smoker, Terry tells us that going with tuna, salmon, sea bass, or sailfish is best for tender, moist smoked fish.

Cold smoking requires temperatures below 80 degrees F for several days. Hot smoking, however, can be done at temperatures of up to 250 degrees and only takes a few hours.

It is best to start with a saltwater brine. The way Terry does it, the brining process is quick so don’t worry about having to start out the day before. Plan on the fish being in the brine for about 15 minutes per 1/2 inch of thickness. Also, plan on 1 quart of brine per pound of fish. The brine of course, makes the difference in flavor. Some people call a brine a “cure” when smoking fish. Whatever you call it, it imparts a lot of good flavor. This process eliminates moisture from the fish, adds flavor, and helps in the preserving process. 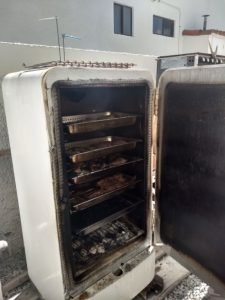 The typical brine has three elements – sugar, salt and water. The liquid can be water, soy sauce or a dry, white wine. Mix together the sugar, salt, soy sauce, water, wine, onion and garlic powders. Pepper and Tabasco sauce are good too. Martha Stewart probably doesn’t brine, but it shouldn’t be hard to come up with a recipe from Google.

Hot smoking can be done in any grill or smoker, is easier and quicker than cold smoking, which may require more specialized equipment and a lot more patience. What you get is equally smoky, but isn’t dried or preserved in the same way. This does mean that hot smoked fish has a short shelf life and needs to be refrigerated or frozen.

On a final note, not only does fish make a great meal or appetizer, it also makes a great ingredient in other food. Try blending the smoked meat with some cheese, garlic, salt and pepper and you suddenly have a great spread for crackers. Many recipes call for smoked fish, from soups to salads to main courses.