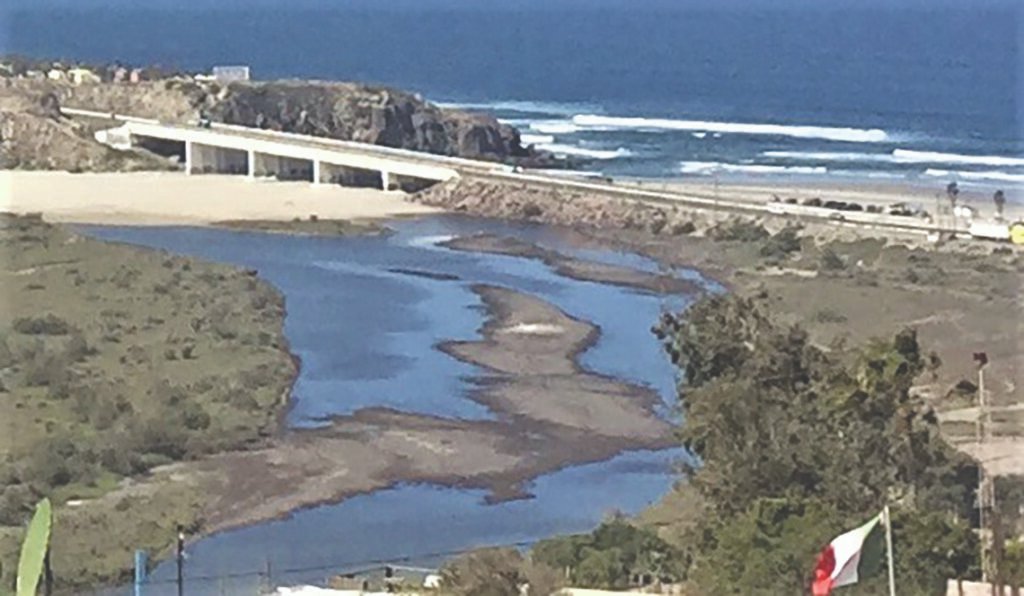 I stood on a hilltop with Cornelio Zapata, a 30 year resident of La Misión. We look down on the estuary and the la Misión River. He shakes his head and says with deep concern, “I have never seen the river so low. It use to run all the way out to the ocean and there were clear pure swimming places. Now it is green with algae.” His small comfortable home was once the only dwelling on the hill. He has had at one time a vast nearly 360 degree view of the ocean and all the way to the eastern mountains. Now it is surrounded by huge multilevel homes all needing water. He is experiencing for the first time a new water restriction.  Senor Zapata added that his good friend, who grew the sweetest white corn, can’t grow it this year; his pump can no longer reach the aquifer which is now too low. While La Misión has always had a natural supply of water from the mountain region and aquifers, it is being threatened. The major cities of Tijuana to Ensenada are impacted by the Colorado River allotment cutbacks which were reported in Part 1 of Water Watch 2022.

Local Reports and Solutions for 2022 Historically people act when motivated to do so. The question is will we be forced into this new reality? Will it be a wakeup to learn we have outgrown Baja’s natural resources, as well as the Colorado River allotment of 1944? Senior Zapata is not the only one in La Misión with water issues. Several new mega houses were built next to his home and neither was given access to water by La Misión Water Company. These homes will rely on the water trucks to chug up the hill. It is reported that the truck owners have their own private wells where they fill up their trucks. Many of the easy sources dried up this year.

John Stadelmann, The President of the Board of Directors for ten years of La Misión Water Company addresses this in his newly released video.  He is proud to announce that water delivery to the homes in La Misión has been “spectacular,” compared to CSPT delivery records in Tijuana and Ensenada. CSPT has frequent break downs and repairs, and “they just don’t have enough water to go around.” Mr. Stadelmann goes on to say that it is important to know the Water Board operates on a license with CONAGUA, the federal water board for all of Mexico. These licenses have 10 year duration, but La Misión’s expired in 2018. Given the fact that high powered lawyers have worked hard to resolve this, the license is still not renewed four years later. “There is a rumor, Stadelmann shared, “between water experts and lawyers that CONAGUA has an intent to close the small private wells to make it possible to give the big municipal suppliers like CSPT of Tijuana and Ensenada, more water volume to distribute.” The La Misión Water Company will fight to keep their water rights.

Mr. Stadelmann continued, “The second more immediate and larger threat comes from within our very community.” CONAGUA, dictates just how much water can be pump from the aquifer each year. Consider the fact that we are able to pump 10 million gallons per year! All the rules on usage per household are driven by this limit.” He said that in 2018 the community rarely used more than two-thirds of the total, and were safely within the limit. But in 2021 it shot up to 82%; at this rate the usage will exceed the license by 2024. Stadelmann warns, “If the abuses continue CONAGUA can shut down our well. It would be an utter catastrophe.” He points a finger directly at the issue of the increase in homes being built and the thoughtless chronic over users. The water is not for swimming pools, fountains, or landscapes. “These chronic over users could be the cause of our license to be repealed…The message is simple, the solutions are not. We all must use a whole lot less if we expect to continue to live here. It requires education, reeducation, some technology and lots of discipline. We are in it together.” These words apply to every coastal community in this state.

Local Reports and long time resident of Bajamar, Ruth Rockwell, says that they have had to close 9 holes of the golf course. Residents in Ensenada are out of city water for a week or more.  Punta Del Mar uses their gray water for landscaping. San Antonio Del Mar is attempting to put together a plan to become self-sufficient, and not rely on the government’s delivery system. John Stadelmann stresses that the water trucks will have to travel to the high plateau and fill from the catch basin which is meant to recharge the underground sources. The increase in rates can’t be far behind. It is skillful to question any new developers as to how they will address their own water and wastewater issues. It isn’t how beautiful the future home may appear, but will there be water to flush the toilet.

Real Solutions should have begun two decades ago. Now it is a rush to catch up, if and when the issue seems real enough in people’s minds. Humanity along the Colorado River has literally drunk the once mighty Colorado dry. Drilling deeper and desal plants are future timelines with major issues. Be careful falling into false hope; be part of the solution and not part of the problem.  If there is a first most important step it would be to appreciate and develop gratitude for the water every time we use it. Realize how many times a day we need it. Appreciation can create the first abatement to our overuse. The next step, get serious about the water declines. We can act now from the comfort of our homes. Create appreciation by taking a few minutes to watch the two videos below. Educate yourself and look for personal solutions. Support the front line workers and begin to understand that we are all interdependent and share this extraordinary water network.

Martina is a Freelance writer, see her ad for ordering her travel book, Dust In My Sandals

Videos of our Water’s 86 mile journey to our homes