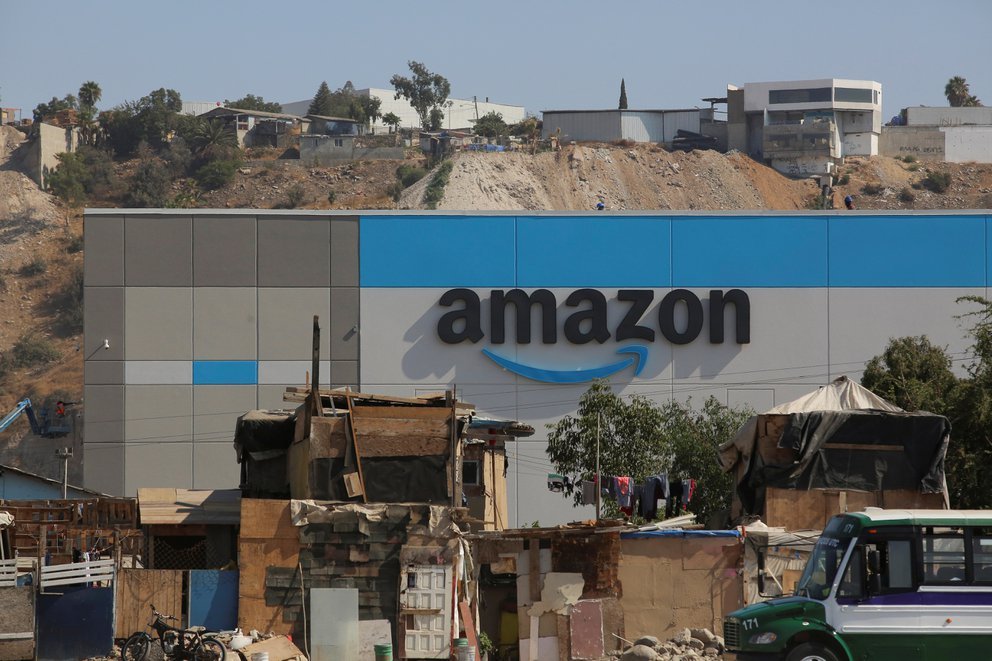 So, as you may have heard, Amazon has built a 344,000 square foot warehouse distribution center in the heart of Tijuana, in one of the city’s poorest neighborhoods, even by Tijuana standards. The shiny white $21 million (US) structure overlooks Colonia Nueva Esperanza’s shacks of discarded wooden pallets, cardboard, tarps, and any material that can be used for escaping the elements. Needless to say there is neither running water nor electricity available to this neighborhood.

Tijuana’s Department of Economic Development intimated that living conditions could improve with the Center’s opening. This begs the question, would Bezos even consider parting with .000001% of his cash hoard to reconstruct these people’s homes, or relocate the affected patrons to a better area? Many officials don’t seem to care as this area is deemed an “illegal neighborhood.” One reporter told me it is because “they don’t pay property taxes.” I couldn’t tell if he was pulling my leg, or not. At this time there is no official plan to relocate those in this north east neighborhood, although they may be offered “more dignified living options” in the future, says Tijuana’s Mayor Karla Ruiz.

Mayor Ruiz believes that the installation of such a major corporation will improve the lives of the locals. “If you change an environment, it transforms the surrounding area.” Really? Or does this just mean that Amazon will “donate” a pallet of cardboard box material and packing tape to “improve” these Tijuana homes.

The eleventh in Amazon’s fleet of warehouse distribution centers, which was set to open in late September, will purportedly employ 250, but no word was mentioned of where these employees are being hired. Probably not to those staring at the gleaming structure in their front yard. This center will only serve customers of Mexico, so it was not a cheap land grab for SoCal Amazonians. Amazon promises same-day delivery to Tijuana and next-day delivery to the cities of Tecate, Rosarito, Mexicali, and Ensenada.

San Diego’s CBS channel 8 reports that a statement from Amazon informs that the company has created more than 15,000 jobs in Mexico, and with the 250 in Tijuana will provide an “industry-competitive salary and benefits for all our employees, such as health insurance, life insurance, saving fund, and food vouchers.” Where do I sign up?

Amazon’s warehouse distribution center may only be just the beginning. There are five other industrial buildings in the area, and Pedro Montejo Peterson, President of the Index Zona Costa hopes that more developers return to the area to build additional industrial buildings which would “invite” other companies to Tijuana.  There is a buzz that other companies are thinking about branching into Tijuana, for its close proximity to the United States. Enough positive change could really help the poorer residents, provided there is an active “trickle down” of advantages. The sad news is that even if the companies move to northern Baja, will they draw from the local workforce, or import workers from the southern United States. Sending the money north over the border will not help these areas at all.

This could mean that our roads will soon be jammed with large Amazon trucks going to and fro. Not a pleasant thought. Now it is no secret that I am an avid Amazon shopper. If I still lived in California I would probably have three or four shipments a week on my doorstep. However, living where I do, in a gated community, sometimes with no one at the gate to let delivery drivers (or anybody else) in, I would probably never use Amazon Mexico for purchases, even with next-day delivery. I performed a legitimate scientific poll of other Amazon users (everyone dining in a local restaurant patio) and all of the stated that they would continue to order their Amazon purchases shipped to their American postal or home addresses, and bring them over the border as they have always done.

Okay, so I sound like a bit of a downer, but I really want to see my local economy thrive. And we can start with those that have the least.