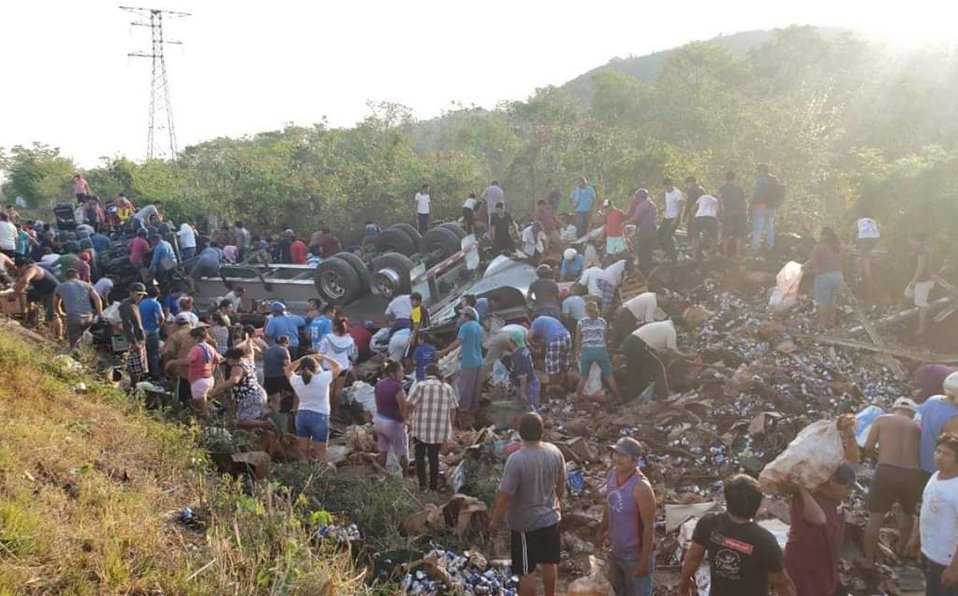 Mexico’s President gives away another prize. Teachers affiliated with the dissident CNTE teachers’ union can now take time off for demonstrations and blockades and even go on strike, and they will still get paid.

“No, no, no,” he said, “there will be no discounts to salaries; teachers have the right to protest …” said President Andres Manuel Lopez Obrador, known as AMLO, adding that  “… in the time we’ve been in government there have been no frequent strikes, children have continued to have classes and there has been no major issue.”

Teachers’ pay had been docked in the past if they didn’t show up in the classroom, a measure coherent with the Education Reform approved under former President Peña Nieto’s administration to reduce strikes and protests.

The president stressed that “this is what democracy is like; when there are no more strikes it means that the political system is dead … there must be demonstrations, different points of view … this is democracy.”

AMLO also explained that his administration is considering analyzing a rule that prohibits the payment of salaries to teachers assigned to positions in the union. At present they must be physically present in the classroom to get paid. The policy was part of the 2013 educational reforms, “and we are for its complete cancellation, all of its policies.”

That’s what CNTE members are hoping as they begin another protest today outside the Chamber of Deputies. A spokesman said teachers will continue to protest until “not even a comma remains” of the education reform of 2013.

Union leaders had announced that 40,000 teachers would march at today’s rally, but the newspaper Reforma said about 1,500 turned up.

Beer truck accident becomes a gift. An overturned beer truck was cause for celebration last week in Santa Cruz, Campeche, in Southern Mexico. About 100 people soon arrived at the scene of the accident on the Campeche-Mérida highway and carried away as much as they could. Some couldn’t wait to get home and cracked open some beers on the spot, including a woman who had to rest from the strenuous task by popping open a can and quenching her thirst.

The pillaging did not stop with the beer strewn on the roadside. Even the truck’s tires were stolen. When state and municipal police arrived, they cordoned off the area but did not intervene or attempt to stop the theft. Questioned by reporters, residents declared that stealing the beer mattered little to the brewery because the cargo was covered by insurance.

No arrests were reported, nor was the cause of the accident and the truck driver’s condition is unknown. It was the second accident involving a beer truck in just two days and the second time that a truck’s cargo was looted.

Trump makes new threat. And Mexico retorts saying that trade and immigration are separate issues, in response to U.S. President Donald Trump’s threat to impose tariffs on Mexican auto imports and close the U.S. border if Mexico doesn’t stop drug and migration flows into the country within a year.

Well, at least we now have a year’s extension, ha!  “For the government of Mexico, keeping migration issues and trade issues separate is very important,” minister of economy Graciela Márquez said.

“The United States government sometimes mixes the two issues, but for us, it’s very important to keep the ratification of the USMCA (United States-Mexico-Canada Agreement) in one lane and issues that have to do with migration in another,” she added.

The economy secretary said that any move by the United States to impose new tariffs would have to be discussed “within the terms of a relationship between trade partners that are modernizing a trade agreement.”

Former president Enrique Peña Nieto, Trump and Canadian Prime Minister Justin Trudeau signed the USMCA deal in November but it won’t take effect until it has been ratified by the legislatures of all three countries. Márquez’s position was supported by the director general of the World Trade Organization (WTO), who appeared alongside the economy secretary at yesterday’s press conference.

Last week, Trump said that “… Mexico, for the first time in decades, is meaningfully apprehending illegals at their southern border, before the long march up to the U.S. This is great and the way it should be. The big flow will stop,” he wrote.

“However, if for any reason Mexico stops apprehending and bringing the illegals back to where they came from, the U.S. will be forced to tariff at 25% all cars made in Mexico and shipped over the border to us. If that doesn’t work, which it will, I will close the border,” Trump continued.

According to Kenneth Smith, a trade official who headed up Mexico’s technical negotiating team in trilateral talks with the United States and Canada last year, Trump’s tariff threats are nothing more than bluster that is politically motivated.

“Trump has no basis to argue that he can increase tariffs. Firstly, because if he increases them … he violates WTO rules, he violates the existing North American Free Trade Agreement,” he said.