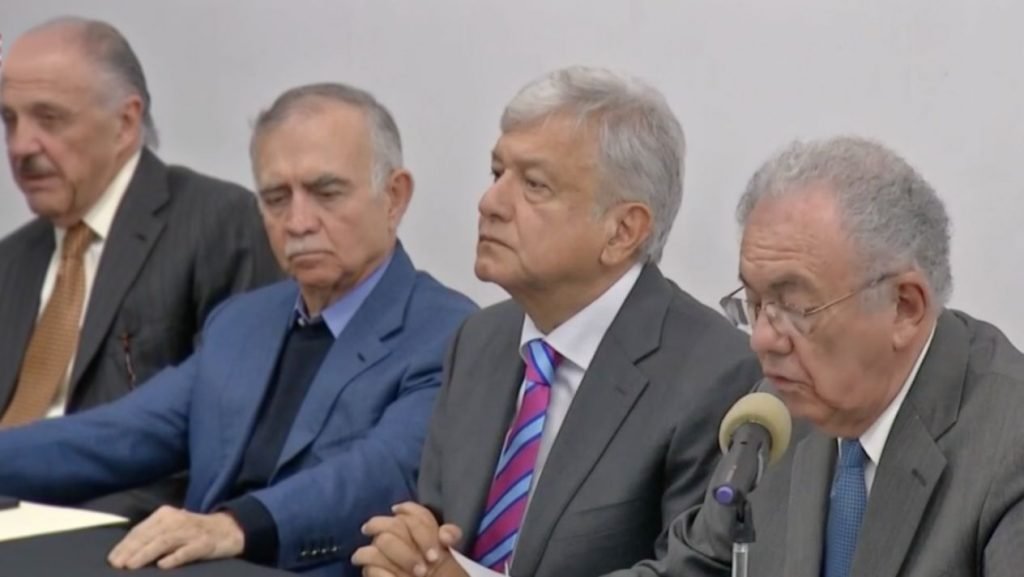 Oh happy day! According to our new president elect there will be no federal government inspectors including those from the tax department. AMLO explained, “we’re going to trust the people.” Ja ja ja! Sure, trust us all to mail in that tax money your government is going to steal and blow on stupid stuff, you bet.

In addition to no Federal Tax Administration (SAT), inspectors, the Secretariat of Health and consumer protection agency Profeco, among other departments, won’t exist during his presidency.

Well, Profeco protects us, we want their consumer protection efforts. Like they inspect the gas station pumps.

Citizens will only have to sign a document pledging that they are “conscious” of their obligation to act within the law, the president-elect said.

It’s not the first time that López Obrador has placed his faith in the people of Mexico. Announcing that he will forego personal security as president days after his landslide victory in the July 1 election, the political veteran said: “The people will protect me. He who fights for justice has nothing to fear.” Yikes.

7 million go thirsty. 20 water truck companies hired by Mexico City to supply the people affected by a planted maintenance water-out are nervous about getting the job done. The water will be turned off for three days (it was initially projected to be four) 930 trucks with capacity for 10,000 to 40,000 liters have been arranged for deliveries, but they expect long wait times at the locations where tanker trucks can load up, meaning they cannot guarantee deliveries to consumers.

Nor can delivery be booked beforehand because the Mexico City water department, Sacmex, will control water distribution at the 450 locations where tankers will be supplied.

Residents of Iztapalapa will have to rely solely on government tanker trucks because private companies refuse to deliver to the borough after their trucks were stolen in the days following the earthquake on September 19, last year.

Residents will have more water at their disposal prior to the suspension in order to fill up water tanks and containers. The National Water Commission will bump water pressure by 15% five days before the suspension begins and for five days after service resumes.

Oh, toughen up! We here in Los Cabos only get water a couple times a week and we don’t stink nor go thirsty. Nor do we whine.

The Vaquita are nearly done, right? Well, maybe not. An expedition to investigate the dwindling vaquita porpoise population found three different groups of the mammals, including babies, raising hopes about its future. It was determined only months ago that the small dolphins found only in the Sea of Cortez were nearly goners, with only a handful left. Well, maybe they’re hiding, they’re shy. How do people know how many there are anyway? Let’s face it, these vaquita huggers have no idea what the hell they’re doing.

No more plastic bags. First it was straws. Tijuana has now banned plastic bags. Living with this isn’t as bad as it sounds. We’re doing it n the States now and you get used to keeping a cloth bag in your car. If you forget they will sell you a paper bag. Of if you’re really us against it, just have them throw all your stuff back into the basket and you throw it all into your car. The campaign against plastic pollution was launched in the spring of 2017 by the United Nations Environment Program.

According to data compiled by the federal Secretariat of the Environment, Mexico generates close to 103,000 tons of trash every day, 10.9% of which are plastics which are often washed away by rain and end up in the ocean.

We’re waiting for someone to get excited about all the unnecessary plastic bottles we’re buying and discarding. We’re not eco freaks but even we think that’s nonsense and we buy our water by the gallon and pour it into smaller bottles we re-use. That’s certainly more important than ripping straws out of our mouths.

Vanished! Money, of course. More than US $852 million in federal health care funding that was transferred to state governments between 2013 and 2017 is unaccounted for, audits show.

The newspaper Milenio reviewed audits conducted by the Federal Auditor’s Office (ASF) and found a range of irregularities in the use of funds allocated to the Seguro Popular health care program. Oh gawd the Seguro popular program. That’s stealing from the poorest of the poor.

The problems include overpayments for medications, payments for which no records exist, unauthorized transfers of funds and the inclusion of phantom employees on payrolls.

Authorities have identified those believed to be responsible for 3 billion pesos of the missing money and have begun the processes to recover it. However, none of those resources have yet been recovered.

The public program provides medical coverage for 55 million Mexicans who have no other health insurance, including 22 million people who earn less than twice the minimum wage (176 pesos or around US $9 per day): in other words, the nation’s poorest people.

Statistics show that the number of doctors, nurses and other medical personnel working in the Seguro Popular system is below both OECD levels and those for Mexico as a whole, while medicine shortages have occurred in several states.

Corruption is suspected of being a significant factor behind the system’s shortcomings and there is evidence that its consequences can be fatal. “Corruption kills.”