Better read this if you live here

Over 80 Rosaritense Americans were in attendance at a Town Hall-style meeting with the local US Consul General, Mr. William Ostick, at the Rosarito Beach Hotel. His primary responsibility is to United States citizens living in the region. Mr. Ostick and his team report to Washington DC and the US Embassy in Mexico City, and are very involved with Chambers of Commerce on both sides of the border. He was accompanied by SES Assistant Jorge Reyes, and American Citizen Service Chief, Nancy LaManna.  Mr. Ostick commended FRAO (Foreign Residents Assistance Office) on their outstanding liaison between the Mexican government and Rosarito Expats, proving the concept of the bi-national region of “Cali-Baja.”

“Cultural, personal, business, and trade flow over the border as do our waves,” Mr.  Ostick announced. “The demise of the border region is greatly exaggerated,” Ostick added. “But I’m preaching to the choir here,” he said, addressing the members of the United Society of Baja California who coordinated the effort to bring the Consul General to Rosarito and to interested members of the Expat community. “We’ve been attempting to arrange this forum for quite a while,” said Judy Westphal, USBC President.

Mr. Ostick reported that due to the slow transition in Washington DC, “not much has changed” locally. “The organic ties; personal, business, and professional have not changed,” and the mayors of San Diego and Rosarito are in constant positive communication. Due to a common set of values, Mexico and the US are “close partners in trade and communication.” So close in fact, that this reporter remembers San Diego and Tijuana researching the possibility of a joint Summer Olympics to bring the countries closer together. Unfortunately, the IOC prohibits a bi-national Olympiad.

Mr. Ostick clarified the new (and legal) Commuter Status being offered to those who reside in Mexico and work in the US. These workers are not in danger of losing their “green card,” however days worked while in this program do not count toward earned days to gain American citizenship.

Back in Washington, NAFTA renegotiations are beginning to take shape. Expats were urged to “Make your voices heard” by contacting your representatives in Washington. Yes, you DO have Washington representation. Your last permanent residence in the US is still considered to be your “home” even for Expats living abroad. To contact your local senator or representative, go to https://www.usa.gov.

The US/Mexico border renovation should be completed in two years. Border crossings in both directions will get easier as there will be four points of crossing locally; two in Otay Mesa, the current “Chaparral” crossing, and reversible lanes located where the old Tijuana entry/exit was. Roadways will be realigned to form a “lazy S” instead of the hard right turn at Chaparral.  “Otay Mesa 2” with “dynamic tolling” and reversible lanes is in the works. Pre-inspection by the California Border Patrol for northbound trucks will cut down on idling, wait time, and smog in that area. And there are proposals to reinstate trans-border bicycle lanes and allow the San Diego trolley to cross the border.

When asked why the northbound tandem checkpoints in San Ysidro aren’t being used, Ostick replied that it was due to a shortage of qualified border patrol agents. Really? They have enough guys to park along southern California freeways looking for speeders, er, illegal aliens, but not enough to staff the border booths.

The government would like to hire another 3000 BPO’s but that is for the entire United States, folks. And the vetting process of new officers is quite lengthy. Mr. Ostick claims that all should be better in two years (which is Ameri-speak for “manana.”) And the tandem booths when in use only increase efficiency about 35%. C’mon, you knew two booths weren’t going to be twice as fast as one. Mr. Ostick added that we should plan our northbound border crossings by checking on Tijuana happenings, such as cultural events (which tend to close major boulevards) and Xolo soccer games.

When pressed about the southbound slow-down at the San Ysidro border by California Border Patrol Officers, Ostick acknowledged the inconvenience and replied that the officers are exercising their right to verify departures from the United States, and it’s usually in response to a “threat.” Okay, so it’s not bad enough we suffer long waits to enter to US, but now they won’t let us out again.

The Cross-border Express linking San Diego to the Tijuana airport has exceeded expectations for usage. This is the only binational bridge between an airport and a foreign country in the world. This innovative approach pays for itself, including labor costs through cross-country tolls. I can only hope the extra traffic doesn’t screw up a really wonderful aeropuerto.

All Americans in Mexico, whether visiting or living here, are urged to register for the Smart Traveler Enrollment Program (STEP) at https://step.state.gov/step.  STEP is a free service for US citizens traveling (or living) outside of the United States. It allows the Department of State via embassies and consulates around the world to better assist you in an emergency.  The State Department offers information on voting, receiving federal benefits, filing US tax returns, and advises on dangerous conditions.  By entering your email, cell phone number, and optional passport card/book number, you will be kept informed of important local information, including natural disasters that may affect your stay. After enrolling, contact the STEP website anytime you want to travel the world, for the latest updates.

Mr. Ostick enumerated the many services available through the American Consulate. Their website, https://mx.usembassy.gov/embassy-consulates/tijuana is your one-stop shop for many needs including renewing and reissuing passports, voting, notarizations of US and Mexican documents, medical evaluations, death certificates, child abductions, crime reporting, aid while under arrest, and vehicle recovery, to name a few.  For most services, appointments are appreciated (and sometimes mandatory) but walk-ins are accepted most of the time.

US Passports may be renewed at the Consulate. You do not have to return to the US passport office or post office; in fact, that is discouraged. Passport card versus book…one or both? The answer depends on your situation. The passport card is cheaper but its use is restricted to Canada and Mexico land border travel. For air or ship travel and international travel, the book is still required. New passport books are equipped for use in border Ready Lanes, which was really the only thing the passport card had going for it. Passport and international travel information is available online at travel.state.gov or passports.state.gov.

The Consulate provides periodic Travel Warnings, which are mischaracterized in the US. These “warnings” or “Secretary’s Messages” do not warn Americans to stay out of Mexico, or state that it is too dangerous to travel. To sign up for messages, go to the Consulate’s website.

Voting: American citizens are encouraged to vote. For voting information and regulations including registration and residency, visit www.fvap.gov.

If an American citizen dies on Mexican soil, the Consulate will contact the next of kin, which is pretty easy if all contact information is registered with the STEP program. The Consulate will help with body disposition, processing and securing the CRODA (Consul Report Of Death Abroad) for the return to the United States.

It’s best to plan ahead and create a “Death Plan.” Have all of your personal papers including passport, birth certificate, marriage certificate, visa, and end-of-life plans in order, and in one location.  Get yourself checked out annually by a Mexican physician. In the case of a natural death, a doctor’s report will speed things along in the creation of the local death certificate and release of the body. Otherwise, a forensics report may be required, and this may take weeks. A Mexican “Doctor of Record” will work with Mexican funeral homes and the process moves quickly.

The Consulate reports a great success rate with locating missing persons (whether or not they are really missing, or just enjoying an extended vacation). The consulate evaluates the danger to American citizens in the case of natural disaster, civil unrest and other dangers, and will send a blast email notice to those registered with STEP. (See? Lots of reasons to get yourself to https://step.state.gov/step. )

In the case of a medical emergency, the Consulate will contact the California Border Patrol for an emergency vehicle to meet you at the border and take you to a medical facility. They have contact with the Mexican Cruz Roja, so if you aren’t already a member of your local Cruz Roja, join! They will get you to the border for transfer (and members receive a cost discount for the ride!) 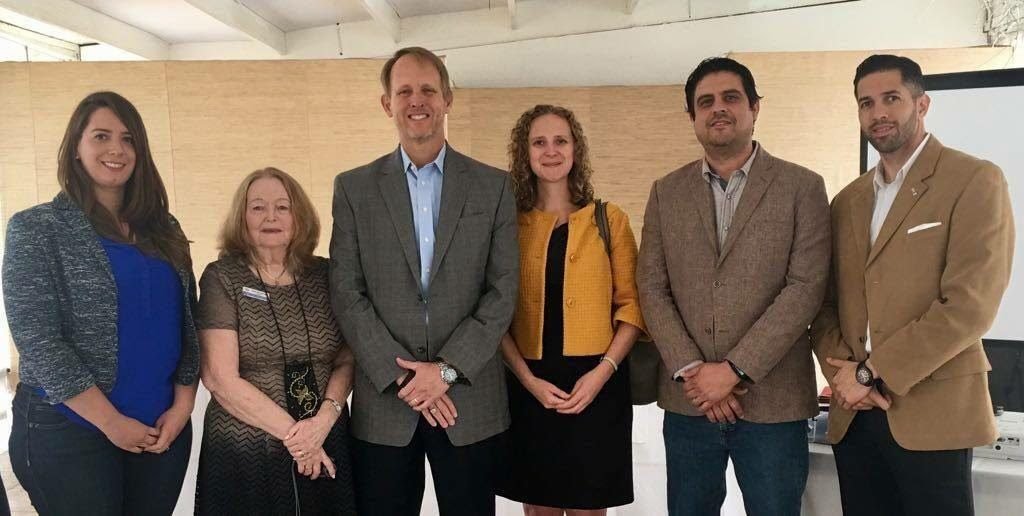 News on prescription medications: Before bringing any Mexican-prescribed medications (even legal ones) into the US, make sure they are approved to cross the border. Many opioids and psychoactive meds even if legal in the US may be confiscated at the border even if you have your written prescription with you. This is a serious matter, and one’s SENTRI may be revoked. Marijuana is still a federally controlled substance (i.e. big no-no), and even with a doctor’s prescription in California, it is illegal to import to Mexico. And if you brought your legal marijuana from California into Mexico, you will not be able to take it back to California.  Confused? Medical “fact sheets” are available at the Consulate’s website.

Got yourself arrested, did you? A representative from the American Consulate will visit you in the pokey, contact your family, and provide you with a list of attorneys (although they will NOT provide you with legal counsel). They may even bring you a Hershey bar (cigarettes are bad for your health). Fun fact: Baja State has the largest number of Consular visits in all of Mexico.

Criminal Victim’s Assistance: The Consulate acting as a “referral agency” will help you contact the necessary office to help you, and will facilitate your return to the United States, should you decide to do so.

Now for the bad news; the Baja crime rate, specifically homicides in Tijuana and Rosarito are at “historic highs.”  Rosarito’s “spike” is from a very low baseline, so it is actually not as dangerous as the published statistics make it seem. The good news is that the tourist areas of Tijuana and Rosarito are very still quite safe, and a majority of the homicides are drug-related, and criminal versus criminal, not affecting the normal law-abiding population. So, stay away from drug dealers!

Whereas, it’s unclear if THE WALL will impact the San Diego/Baja border, there will be a series of mini-walls built in an area east of Otay Mesa; a contest between builders bidding on the wall’s construction. Secretary of Homeland Security John Kelly announced that border “walls” will be “the appropriate structure for the [region’s] conditions.” I wonder if there’s a chance that all contestants will get voted off the island.

US Consulate hours are 7:30 am – 4:00 pm Monday through Friday, and Saturday: 7 am – noon.  Email: [email protected]  Phone: 664-977-2000 or 1-877-487-2778 during business hours. After-hours emergencies may be reported to the Duty Officer at 1-619-692-2154 or 1-202-647-4000. Website: https://mx.usembassy.gov/embassy-consulates/tijuana; Facebook.com/Consulado General de Los Estados Unidos en Tijuana;  physical address: Paseo de las Culturas, just off of Boulevard Lazaaro Cardenas, which is hard to miss if traveling from Rosarito to Otay Mesa border crossing. There are signs, and it is the only big government-looking building in the area.

And become acquainted with the FRAO office, located on the first floor of the Rosarito Government building. This office can answer many questions regarding life for Expats in Mexico, or direct you to the proper department. Email: [email protected]; Facebook.com/FRAO.Rosarito; phone: 661-614-9600, ext. 1080.