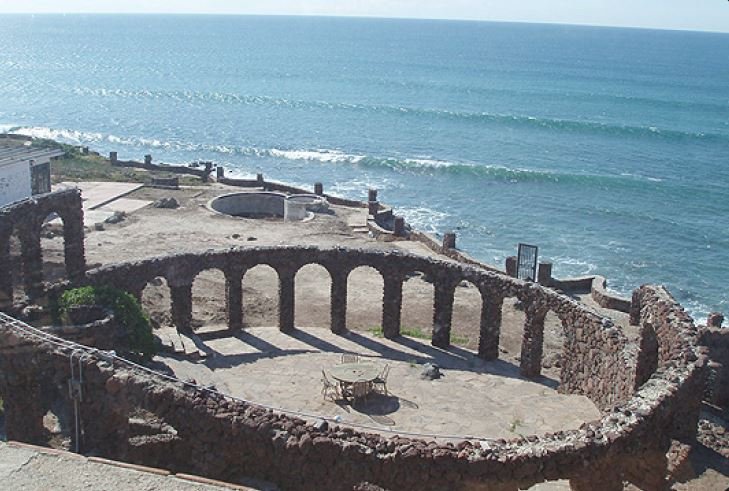 Just at the edge of the ocean’s bluff on million-dollar property with a priceless view of the Pacific is one of the oldest buildings in south Rosarito Beach. It is hidden in an older section just south of Calafia, behind an old wall. According to legend, Al Capone and his friend Jack Dempsey used it as a getaway during prohibition, in the late 20’s and early 30’s. Now, new owner David Perez has refurbished the historical landmark, and will soon re-open the place as a restaurant.

Al Capone’s name still stirs the imagination. He was considered the most powerful crime czar of his era, and was on the FBI’s “Most Wanted” criminals list. Many stories and movies chronicle the violent murders and shootouts that were his trademark. During prohibition, Capone hung out with Hollywood names and also with Jack Dempsey a famous boxer. The rich and famous frequented Baja to escape the strict liquor laws of the time. Al Capone built hideouts in three places along the Baja coast. All of his hideaways have bulletproof walls, have outside patio and entertainment areas, and are in locations where Capone could clearly see the road from both directions. One of these sites is The Castle.

The historical site has been renovated by David Perez, who was born in San Diego and raised in Tijuana. Although Perez is fully aware of the current high market prices for coastal Baja property, he says that they project is “more a life-long dream than a financial venture.” Perez calls himself a “Jewcano” and has his own fascinating story of life in early Tijuana. David’s father, a Mexican Jew, bought the expanse of coastal property in 1966. At the time, he was the top mathematician in Mexico, and he founded the Tijuana Technological Institute. When Perez first saw The Castle in 1973, he dreamed of renovating it.

But, Perez was busy with his own life, running a Hollywood catering business which took him on location with top industry names like Matt Damon, James Cann, Winona Ryder, and Charleston Heston. He fed the cast of the series of “Dallas” and nearly married Ricardo Montalban’s daughter. But it wasn’t until 2000 that he could begin the restoring The Castle, attempting to keep it as authentic as possible. He opened August 15th, 2005

After additional remodeling, The Castle reopens February 1st. The menu offers Filet Mignon in a Portabello mushroom sauce, and fish and chicken dishes in creamy garlic tomato sauce and a wonderful crab sauce.

The Castle is known for its chicken breast stuffed with cuitlacocle, a black mushroom considered to be the “Mexican Caviar,” and covered in a crispy cheese wrap. The full bar is has a complete wine list and David’s “Drunken Nun” margaritas. The lunch menu features Mexican food with a special touch. David says, “We don’t have clients, we have friends, and sometimes they will stay all day and into the night.” They plan a surprise for the locals, a weekly special “Al Capone, The Best Damn Past Night”, as well as 20% off of the regular menu price, just by mentioning this article in the Gringo Gazette. No reservations are necessary. For more information call 661-613-2022.