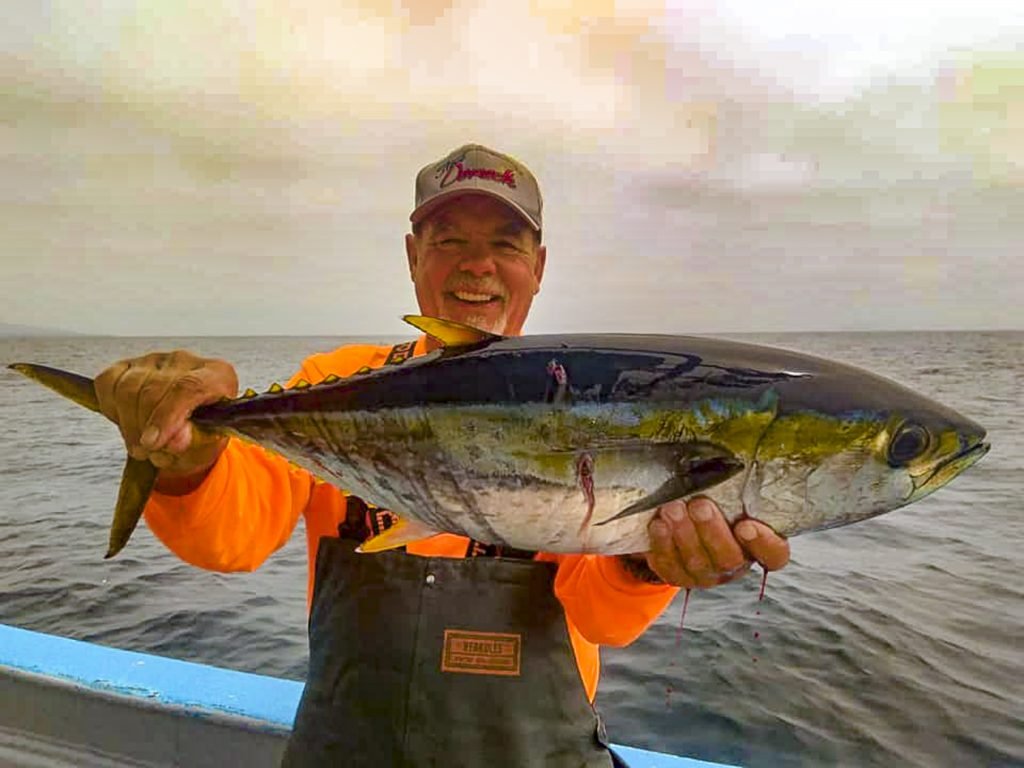 Trolling along the outer edge of the kelp beds found along the shore have been yielding an occasional yellowtail to spice up the calico bite; also, watching for the bird schools is a giveaway to where the fish are feeding — barracuda, yellowtail and bass that might be chasing the bait to the surface. From there towards the International Reef, there are scads of big bonito also feeding on the surface.

Good fishing for that same 5- to 7-pound bonito that has invaded the entire south coast all the way to Ensenada. Yellowtail fishing, however, isn’t very good. It is slow now after a wild spring and summer. There are no reports of bluefin recently. The last ones seen/caught came from the area between Ribbon Kelp and the 5 Minute Kelp.

Lower 9 / Coronado Canyon The area runs from just NW of North Island to down the Canyon pretty much all the way south to the 425.

Boats fishing here are scoring good counts of yellowfin tuna; most are in the 8-to 15-pound range with a few showing up in the 20- to 30-pound class. Skipjack are biting also. These are mainly in the 5- to 15-pound class and are jumping on small, bright-colored feathers.

There’s an occasional dorado lurking under anything floating as well.

425 / 371 / Upper Hidden Bank / Hidden Bank Here is where the fleet of sportboats along with private boats are loading up on yellowfin and skipjack. Some of the better stops are coming off kelp beds but the boats are also getting plenty of jig stops, finding fish on sonar marks and from finding breezers and bird schools.

The average-size yellowfin has increased a bit. Many are now over 10-pounds with quite a few of the 15- to 25-pounders mixed in.

The northern zone is just a little east of the 425 (FMM permits required), and the southern zone is between the 425 and the Hidden Bank (outside the 12-mile FMM zone).

Inshore surface action throughout the bay has been a steady pick for bonito, barracuda and a few yellowtail for the few boats fishing recently. However, the almost always reliable go-to bottom fishing assures limits of lingcod, reds, sand bass and rockfish to fill the coolers.

Farther offshore, outside the Islands, the kelp paddies are holding dorado, yellowtail and some yellowfin tuna down deeper in the water column — maybe 50-to 100-feet. Farther offshore, schools of yellowfin can be found mostly of the smaller variety with a few up to 30 pounds mixed in.

For the adventurous, there are striped marlin hanging around some of the high spots to the north and south up and down the coast.

Offshore has been hit or miss for most. One day there will be yellowfin tuna and maybe even a dorado or two in the count and then everyone gets fired up and runs outside the 240 and comes up short.

Squirrelly weather, erratic sea-temp, off-color water all seem to get honorable mention for the condition.

So far, the inshore has been much more productive — small to medium yellowtail, and more big bonito that seem to be consistent all up and down the coast now.

And of course, for the meat fishermen, bottom fishing is always a reliable alternative with some nice-sized lingcod, reds and other rock fish to add to the catch.

There’s great fishing at the island right now. Yellowtail and dorado on the south end high spots. Live bait, Rapalas, and surface iron are all working. Calico fishing is fantastic with 75- to 100-fish days not unusual. Plastics and stick bait are your best bet and bring plenty.

The wahoo and yellowfin are biting Rapalas at Benitos recently.

Hot weather seems to have thinned out the number of visitors to the area. Hence, sketchy reports would indicate that there is live bait near the launch ramp.

The dorado are still in the zone on the surface and again anything floating is the key to finding them while you are trolling lures.

Most of the yellowtail are being caught around the pinnacles around the outer islands.

Inshore along the shore trolling rapalas in shallow water can be productive, particularly during the summer when creating your own breeze helps keep you cool while you are catching cabrilla, spotted bay bass and who knows what else.