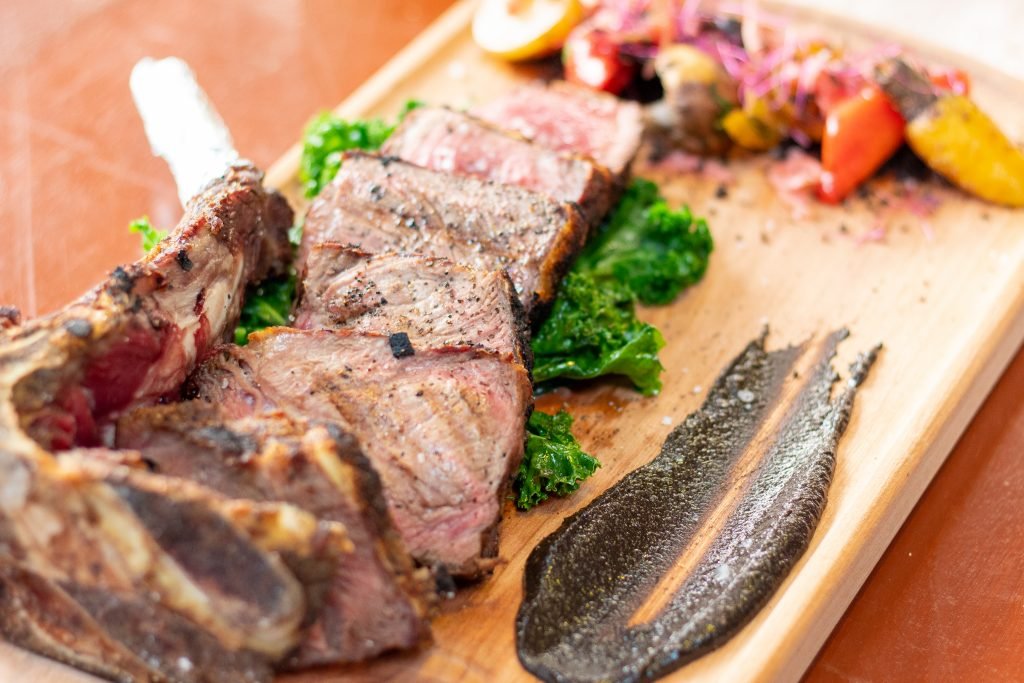 Whenever I think of food sold in the Bufadora area, fish tacos, seafood cocktails and churros come to my mind. BajaMed cuisine is something that never crosses my mind.

That all changed last week when my wife and I visited La Bufadora Tequila Grill, which, judging solely by its name,  seemed to have even more of the same; the name somehow evoques fish tacos and margaritas in my experience, but oh my god was I wrong!

When we arrived at the restaurant, we were met by the owner, Alex Malpica, popular in the area as a resident of the Rosa Negra Ranch, one of the most popular properties in the area, having already been featured in 4 movies. In contrast to the fabulous property he calls home, I was not impressed with the restaurant, which seems to have a funky ambiance; I asked Alex about it and he said that he just wants to maintain a relaxed, easygoing atmosphere to his restaurant.

Alex told us that he came here from the US several years ago, retiring from the restaurant industry over there, and decided to acquire this restaurant. For many years it did very well, selling the usual combination of affordable Mexican dishes that are a staple for Bufadora tourists, but about a year ago Alex had an idea: What if he could bring food similar to the meals served in the wine valley to his Bufadora restaurant.

It seemed like an impossible idea. How would he even begin to succeed in such a daunting task, but in the process of searching for a solution, he met local Chef Temo Cortez. Temo brought to the table exactly what Alex was looking for, being an experienced chef who could create fine BajaMed cuisine at his restaurant.

Alex is not an easy man to impress, in my opinion; it’s even harder to impress him in the restaurant industry, as he has more than 40 years of experience in that area; so naturally I was very curious about Chef Temo that he talked so highly of.

Since I’m more easily impressed by actions than by words, I listened to what the pair had to say but decided to reserve my opinion until I tasted the food there.

We asked for a menu and got a letter sized sheet with about 14 different dishes, we decided on the shrimp, aguachile style, and a Tomahawk steak.

While we waited, Alex explained that one of his passions was Tequila, and that he makes his own Extra Añejo tequila, for which he has recently started distribution in the States. While we waited for our food we tasted two of his tequilas, Xedda and Escortauro, which were very good.

Chef Temo surprised us with an octopus tentacle appetizer, served sizzling in a mini iron pan. As soon as the plates arrived, I was impressed with the presentation; here I am thinking that I’m once again going to be let down with the food at one more restaurant, and this beautifully constructed plate comes to our table, and when I tasted it, oh my god, the savory, meaty, octopus just instantly takes me to the Valley; this is actually wine valley food, I say to myself.

A couple minutes later the shrimp aguachile comes, nope, it was definitely not your typical Mexican seafood restaurant aguachile, this one had a very subtle flavor, acidic but very well balanced. Later I learned that this was achieved by chef Temo by adding white wine and olive oil to the green chili and lemon juice. The presentation was immaculate, adorned with Salicornia and beet sprouts, which also helped bring the flavors of the plate together.

A few minutes after we finished with the shrimp, the Tomahawk was brought to the table. Another one of Temo’s gems, beautifully presented, cut into pieces, with the bone still left on the plate. By that time, after the first two dishes, I was already expecting greatness and I was not disappointed; in fact, I was once again impressed. The steak was beautifully accompanied by a dab of Oaxacan mole with balsamic, and roasted vegetables

When we finally finished the steak, we were already stuffed, but we opted for the  crème brûlée anyway, it was a great finish to our meal.

The Bufadora Tequila Grill is located on KM 22.5, on the road to La Bufadora, just a few meters before getting to the arches that mark the start of La Bufadora. They open Tuesdays from 12:00pm to 8:00pm and Wednesday to Sunday, from 8:30am to 8:00pm. BajaMed style cuisine is only available from 2pm to 8pm, and Sundays all day. ,