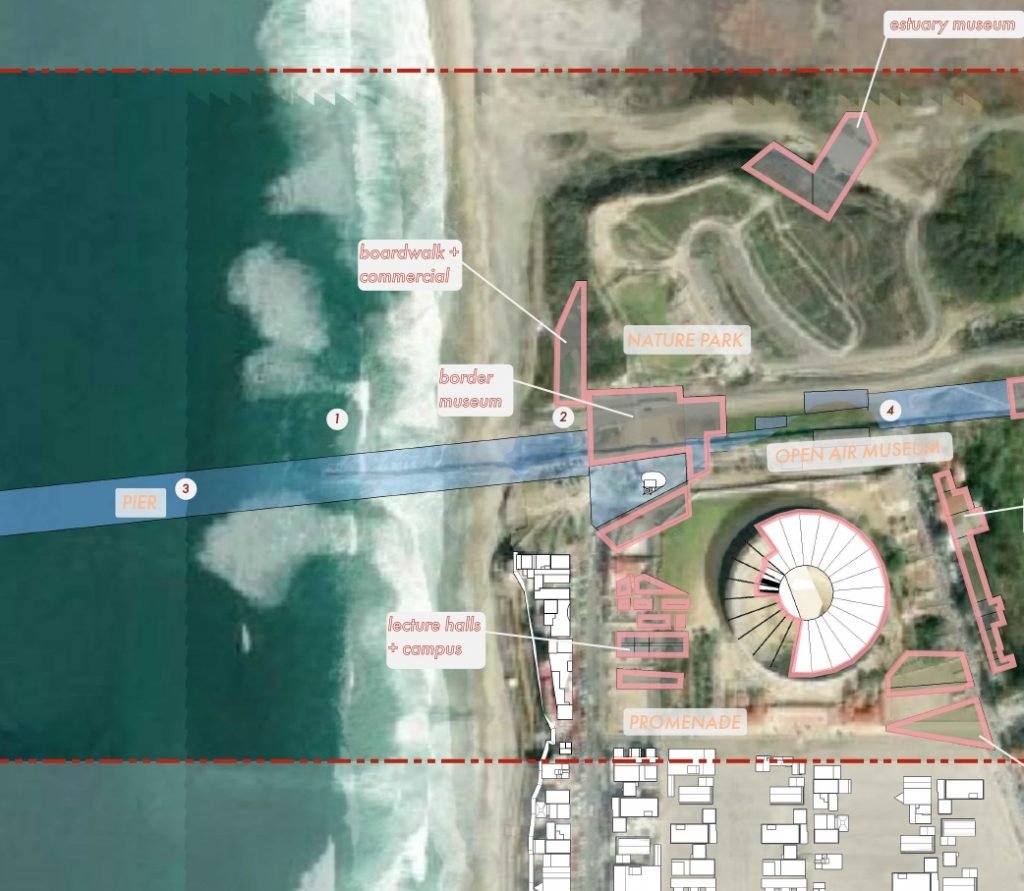 “Build That Park” organizers launched a 12-month long public education and design development campaign to raise awareness and solicit input for a proposed bi-national park along the Mexican/U.S. border, where California meets Baja along the Pacific.

Hugging the boundary of the wall in Tijuana, the site is home to Friendship Park and the binational garden of native plants, which serves as a gathering site for a community advocating unrestricted access to both sides of the border. To the north, on the very southwestern corner of the U.S., 1.5 miles south of San Diego, a wildlife refuge inside Border Field State Park forms the perimeter to the other side of the border wall. On these and other expanded sites, including the bull ring to the south in Tijuana, chief architect James Brown envisions a park embodying values of peace, friendship, cooperation and security.

During the year-long design phase, input will be solicited from stakeholders, community activists, artists, designers, grassroots organizers and first nations people. Engagement with the public is key to formulating conceptual design plans that will be unveiled on August 18, 2021, the day marking the 50th anniversary of Friendship Park.

Building parks in cities sharing frontiers has historical precedent. At the US/Canada border crossing, green lawns and flowering gardens of Peace Arch Park, straddling British Columbia and Washington State, gives rise to a dramatic white arch, a symbol of peace, honoring the peace treaty that ended the War of 1812. On the Mexican border, the white stone border marker in Tijuana’s Friendship Park stands as a monument to the end of the 1848 U.S. Mexican war and the signing of The Treaty of Guadalupe Hidalgo. “The terms of that treaty have relevance to building a park on the border today”, said James Brown, “reciprocal benefit, cooperation and security for both countries outlined in that historical treaty are the values guiding the new park design”.

The design process will draw on a peoples’ history and the collection of personal stories woven into a visionary plan for the park. There will be international competitions for the design of vertical gardens, outdoor event spaces, interpretive centers with conference rooms, trolley terminals and pedestrian walkways, among other structures proposed in the building plans.

Spanning the two frontiers, the binational garden will encompass an expanded area, with greater opportunities to link shared ecosystems divided today by artificial political boundaries. Binational cooperation of the landscape will enhance control of exotic invasive plants and restoration of native flora. “After 15 years of working in the garden”, said Daniel Watman, founder of the binational garden, “and dreaming that some day the garden would outgrow the walls and end militarization, I’m ecstatic about the prospect of expanding native flora across barriers to bring people together and form collaborations that will improve the region we share”.

The fate of two countries sharing a border are linked. A binational park on the Mexico/U.S. border can serve as a model and living symbol of peace between the two nations, exemplifying what can be achieved through cooperation and collaboration.

Visit www.buildthatpark.org for more information about the project and to learn how you can help.