Wide open bonito fishing this morning in the Point Loma area down to IB. The bones were along the kelp line biting small sardines and chrome jigs along with a mix of calico bass, sheepshead, small rockfish and a few legal-sized lingcod.

More bonito can be found a mile or so outside. 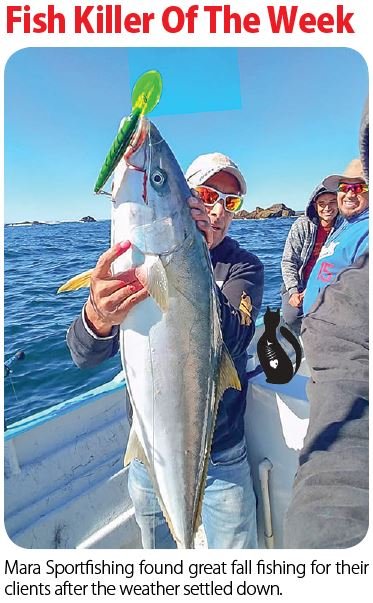 The only surface fish that is being caught is the bonito which are along the weather side of North Island, the Middle Grounds, the Ribbon Kelp and the SKR. Some are big, coming in at well over the 10-pound mark, but 95% of them fall in the 4- to 8-pound class.

Slow-trolling sardines and Rapalas seems to be the ticket for the really big ones.

Other than this, the only thing biting are rockfish and whitefish.

This zone continues to be your best bet for a “local” yellowfin with the best area being below 32.06 down in the Upper Hidden Bank area.

There is a temp break running east/west at that number. Temps are below 68 to the north of it and 68- to 69- to the south.

The yellowfin, skipjack, yellowtail and dorado are nearly all on kelps now with not a lot of open-water jig stops happening.

The average size is small. The yellowfin are mainly 6- to 10-pounds with a few up around 20-pounds. The skippies are in the 5- to 8-pound range. The yellows are little rats, from 1- to 3-pounds and the dorado are 5- to 10-pounds.

After some shaky fishing when the hurricane passed far below in the Baja midsection, the surface action resumed with a vengeance. Limits of lunker-sized yellowtail were a pleasant surprise for anglers looking for a fish fix with limits rounding out good bottom fishing as well.

Like Ensenada, both inshore and offshore seems to be returning to the conditions prior to the storm. There has been some great fall action for the few anglers visiting the area now. Still, there’s some yellowtail along with great bottom fishing that is almost a given. Hopefully, the fall season will continue until November.

As the lodges close down for the winter, the timing could not have been better with the recent storm that hit the area recently. The fishing remained good right up the the storm. Since then, it has been quiet.

Recent reports indicate the dorado that arrived during the summer are beginning to leave as the sea temps cool down. Already, there have been some comments about the north winds. Hopefully they won’t begin in earnest until late in November.

Meanwhile the bottom fishing for cabrilla, pargo and plenty of other takers is holding steady with most anglers limiting out often.